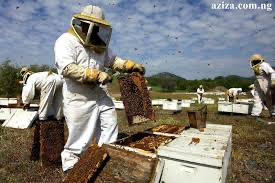 By Mustapha Yauri
Zaria (Kaduna State), Aug. 24, 2020 Beekeeping Extension Society, an NGO, says it has shifted the production of honey from Kaduna State to Kano, Gombe and Bauchi states due to security challenges.

Mr Idris Mohammed-Barau, the President of the society made this known in an interview with Newsmen on Monday in Zaria.

He said it was regrettable that over 3,000 beekeepers were forced to abandon the business in Kagoro, Kafanchan, Songa, Tudun Kagoro and Mariri areas of Kaduna State.

“We used to have lots of beekeepers in the southern parts of Kaduna state but insecurity in the area obstructed honey production.

“We have laid over 1,200 honey hives in Ladduga but during the training, the engineer who was installing the solar panel for the skills acquisition center was killed.

“You cannot expect me to go back to such areas again,’’ Mohammed-Barau said.

He said that some of the beekeepers in southern part of the state were either kidnapped or killed in the process of harvesting their honey, which forced many to abandon the business.

The society president said the association, in collaboration with another NGO, Bees Abroad was focusing attention on Kano, Gombe and Bauchi states which are relatively safer.

He said the society in collaboration with Bees Abroad and the UN, developed a network of beekeepers in Gombe state with over 200 members.

Mohammed-Barau said the society had obtained funding to train and empower 300 beekeepers in Kebbi, Sokoto and Zamfara states to enhance honey production in Nigeria.

He said that the society with support from its partners trained over 4,000 beekeepers in Kaduna state.