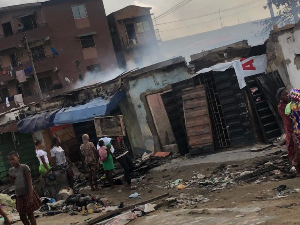 By Aisha Cole
Lagos, Aug. 23, 2020 The Director-General, Lagos State Emergency Management Agency (LASEMA), Dr Olufemi Oke-Osanyintolu, on Sunday said that 16 kiosks and 14 shops were gutted by fire at the Adeniji Adele Market in Lagos.
Oke-Osanyintolu made the disclosure in an interview with newsmen in Lagos.
He said that the agency received a call through the Toll Free Lines 767/112 about 3.13 a.m. on Sunday, adding that the LASEMA Response Team collaborated with other responders immediately to put out the fire.
“With a response time of under 10 minutes, the wee hours fire outbreak operation was promptly attended to; the fire has been tentatively attributed to electrical malfunctions.
“The fire, which reportedly started from an unidentified shop, affected a total of 14 shops and 16 kiosks.
“It was finally curtailed by the combined efforts of the responders,” Oke-Osanyintolu said.