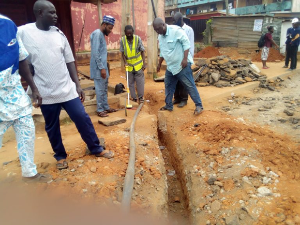 By Grace Alegba
Lagos, Aug. 23, 2020 The Mosan Okunola Local Council Development Authority (LCDA) has earmarked N35 million for the rehabilitation of roads within Gowon Estate in the council area.

The first phase of the project was stated last week with the reconstruction of the total length of Rooad 411 in the estate.

Naija247news reports that Gowon Estate is one of the abandoned Federal Housing Estates in Lagos.

Speaking to Naija247news, David Ojele, a Lagos resident lamented on the economic consequences and burdens of not completing a road project on the local residents.

Monsan Okunola LCDA is part of the Alimosho Local Government area, the largest council area in Lagos State with estimated population of over two million people.

NAN correspondent, who visited the site on Sunday, reports that Road 411 had been graded, while workmen were seen taking measurements and realigning underground cables.

Commenting on the construction, the Secretary of the Mosan Okunola LCDA, Mr Ayo Orimolade, told NAN that the council was committed to infrastructure upgrade and road reconstruction.

Orimolade said that the Gowon Estate 411 Road Rehabilitation project would be completed within 12 weeks, while plans were in place to begin other roads in the estate on completion of Road 411.

“This project has just started and the council chairman has a list of roads in that estate she wants to rehabilitate, but the repairs would be done in phases,’’ he told NAN.

Mr Kabiru Yusuf, the Managing Director of Razor Edge Project Ltd, contractors to the project, told NAN on the site that the Road 411 project was already about 30 per cent completed.

“For now the LCDA has decided to break the project into phases, the phase one is about N35 million and by the time we evaluate, we will get the final figure for the phase two,’’ he said.

Yusuf said that the LCDA was working on awarding the next phase of the project and the firm was in consultation with the LCDA on how to address some concerns on design raised by residents.

“Some members of the community have been here to speak to us on what they want on the road, they told us they needed us to introduce walkways because of the number of students passing here when schools are in session.

“We are looking into it, we are looking at the existing designs because we discovered that there are existing walkways on the road, so we want to see how we can harness what is on ground from design so that it can help the community.

“We are planning speed breakers at intervals of like 50 metres that can regulate the speed of motorists,’’ he said.

Kabiru promised that the road project of about 420 metres would be delivered on schedule.

“We just started about a week ago and we have graded the road, tried to remove all the shanties along the right of way to recover the necessary road set back.

“What is left for us now is to start spreading the stone base, taking the levels of the earth works and later do the interlocking paving stones,’’ he said.

Ongoing rehabilitation of the Road 411 in Gowon Estate in Lagos State by Razor Edge Project Ltd
Kabiru commended members of the community, saying that they had been supportive in removing some of the obstructions on the way.

Yusuf said that the underground drains were being evacuated as part of the project to tackle the problem of flooding, adding that damaged manhole covers on the road would be replaced.

Alhaji Dauda Oyebanji, the Chairman of Gowon Estate Community Development Association (CDA), told NAN that the estate had suffered long years of neglect resulting in massive infrastructure decay before the council stepped in.

“Let me thank the executive chairman of this LCDA in person of Honourable Princess Adebisi Adebajo who found it very appropriate and important for us to have this road rehabilitation.

“This road has been there for more than 30 years and has not been rehabilitated. There was nothing we could do because when the Federal Housing Authority (FHA) left, they left us with our problems.

“This is a Federal Government Estate, we cannot use our money to do it unless the government comes to our aid. There was nobody to help us and we left it until the executive chairman stepped in.

“She was the one that constructed 41 Road, the major road in the estate, four years ago and we appreciate it and we thank her that it is now the turn of 411 Road,’’ he said.

Oyebanji, like other residents, recalled the hardship faced by motorists and residents along the road and appealed to the contractor to deliver quality road on schedule.

Mr Gabriel Oyabande, an octogenarian, who lives on Road 412, thanked the council chairman for the project, but called for measures against road abuse by traders, food vendors and other businesses encroaching on the road.

An undergraduate, Miss Obianuju Egbunike and a civil servant, Mr Joel Nwamama, said they were excited by the road rehabilitation and commended the council for the project.