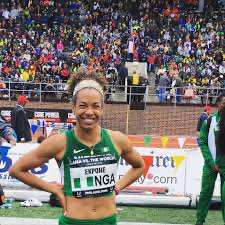 By Chimezie Anaso
Awka, Aug. 23, 2020 Obioma Medani, a former sprint star, has called on individuals and groups to support sports development at the grassroots to enable budding athletes to attain their highest potential.

Mediani, who is based in the U.S., made the appeal in an interview with Journalists in Awka on Sunday.

She said sports had the potential of lifting many families out of poverty, hence the need to encourage it at the grassroots.

According to Medani, the developed world does not joke with it, that is why there are academies everywhere, they groom their talents from the scratch and that is why they rule the world at early age.

“So, I am happy with what All Sports Foundation Academy, Nimo (ASFAN), in Anambra is doing.

That is why I am supporting them and also calling on others to appreciate the good work they are doing for the society,” she said.

The Anambra-born veteran, who is the Managing Director of Obigold Entertainment and Events, said that her organisation had donated sets of jerseys and other items to support ASFAN’s good work.

ASFAN is an Anambra-based sports academy owned and managed by Jonny Igboka, a national athletics coach, which had produced national and international champions.

One of them was Ebele Agbapuonwu, the 400-metre World Champion from Bahrain, popularly known as Salwa Eid Naser.

Medani said it was a lot easier to promote sports in the past when it was part of the academic curriculum because young athletes had time to do sports within the period of study but regretted that that was not the case anymore.

According to her, in America and other nations that excel in sports, their educational system has space for sports just like it was in our time back in Nigeria but regrettably our school sports programme has died.

“The saving grace now are the sports academies we have, where people with passion, like Jonny Igboka, are breeding the young starts.

“These academies need our support because they are expensive to operate,” she said.