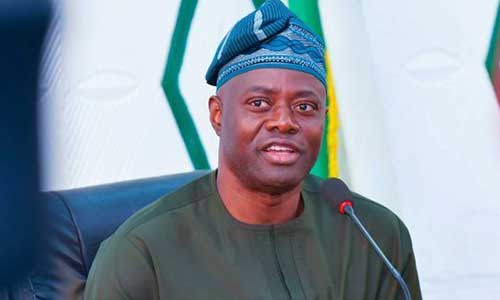 By Ibukun Emiola
The leadership of Colleges of Education Academic Staff Union (COEASU) has commended Gov. Seyi Makinde of Oyo State for prioritising the welfare of staff in spite of the economic downturn in the country occasioned by COVID-19 pandemic.

The two unions made the commendation on Saturday in a statement signed by Mr Nuhu Ogirima and Mr Taiwo Olayanju, the president and she of the union respectively.

“It is on record that despite the dwindling economy and in the face of economic hardship occasioned by the novel Coronavirus pandemic.

“You have ensured that the well-being of our members, and indeed, the workers in the state, is given prority”.

According to the statement, the governor’s commitment to the course of the unions is evident in the prompt payment of workers’ salary and defraying of workers’ debt owed by past administration.

The COEASU leadership, while highlighting the achievements of the governor, prayed for more wisdom in the discharge of his duties.

It also lauded the labour-friendly disposition of Makinde which it said had brought about industrial harmony and restoration of the pride of education in the state.

“Be rest assured that the union is ready to partner with your administration to achieve the desired goals in teacher education in particular and education in general,” it said.

The union also solicited negotiation for a new affordable and payable tax regime by the colleges of education.

COEASU said it expected the implementation of the consequential adjustment on the minimum wage for the staff of the colleges.

“This passionate appeal is borne out of the need to ease the financial burden on our members made worse by the Coronavirus pandemic” the statement said.