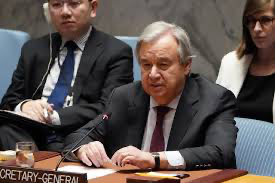 “The Secretary-General calls for the immediate restoration of constitutional order and rule of law in Mali,’’ UN spokesman Stephane Dujarric said in a statement.

Keita and Prime Minister Boubou Cisse have been arrested by the military in an apparent mutiny, Army Officer Sidi Gakou said on Tuesday.

Also, the AU Commission condemned the arrests and called for the immediate release of both leaders.

Mali has been struggling to maintain stability since tens of thousands of opposition supporters accused Keita of gross intimidation and vote-buying during a parliamentary election in April, which gave his administration a firm majority.

Soldiers started mutiny early Tuesday in the garrison town of Kati, 15 kilometres north-west of Bamako. Gunfire was heard in the capital.

Earlier in the day, the Economic Community of West African States (ECOWAS) said it was “greatly concerned” about a mutiny taking place.

Soldiers should return to barracks, refrain from “unconstitutional action” and instead try to resolve political differences through dialogue, ECOWAS said in a statement.

“France has learned with concern of the mutiny that has started today in Kati, Mali. It condemns this serious event in the strongest terms,” the Foreign Ministry said in a statement.

The U.S., Australian, and Swedish embassies in Mali warned of possible unrest in the volatile West African nation, urging their citizens to stay at home.