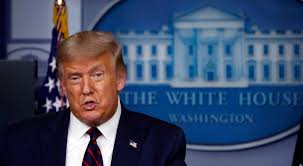 Washington, Aug. 19, 2020 (dpa/Naija247news) U.S. President Donald Trump will use the White House to deliver a partisan political speech to the Republican National Convention next week.

Trump will be formally nominated by the party next week and is due to give his acceptance speech at the end of the four-day convention, which is taking place mostly online due to the coronavirus pandemic.

During a visit to Arizona, Trump confirmed he will make the speech from the South Lawn of the White House on Thursday.

He also pledged to give the speech live, mocking Michelle Obama, the former first lady, who reportedly had pre-recorded her speech well in advance of its broadcast on Monday to the Democratic convention.

The move to hold the speech from the White House is unconventional, and does not have a precedent in the television era.

White House legal advisers have approved the speech, noting the laws that prohibit politics in the executive branch do not generally apply to the president himself.

Trump has been using official travel to hold campaign rallies, in part because his regular events with supporters have been cancelled because of the virus.

An attempt to hold one earlier in the summer flopped.

Polls show Trump trailing Joe Biden, the Democratic Party’s candidate, ahead of the election on Nov. 3.