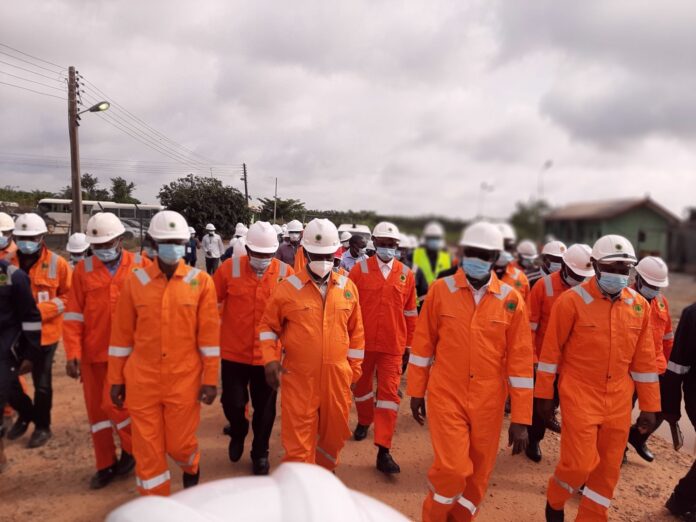 By Nefishetu Yakubu
Benin, Aug. 19, 2020 The Nigerian Petroleum Development Company (NPDC), on Wednesday said it was targeting the production of 500,000 metric tons of Liquefied Petroleum Gas (LPG), volume per day to contain the importation of LPG into the country.

“A little around one year ago, NPDC was producing about 136,000 metric tons (mt) per day, today we are producing 260,000 mt liquefied Petroleum gas per day.

“This is a very magnificent level of growth in any upstream company and our target is to take this company to production level of 500, 000 mt LPG per day.

“This is possible within two years, we have lined up a number of projects and activities and today we have the highest number of rings running in this country.

“We have five rings running at the same time adding incremental value and delivering major projects which will ultimately take us to the production of the 500,000 mt LPG per day,” he said.

He stated that the plant had a capacity for 100 million standard cubic feet of gas per day with estimated product stream of 330 tons per day.

According to him, this is very monumental compared to the current levels where all the supply except those coming from the NLNG are coming from imports.

“We are trying to contain importation of gas because Nigeria is blessed with gas resource and we cannot be importing LPG from anybody.

“Completing this project is a monumental feat for this country and ultimately what is important is that this country will be sufficient in LPG within a short period of time.

“With the support from President Muhammadu Buhari gas will now be delivered without interruption into the domestic market and supply of crude oil to the international market by our own company.

“Today we are making about five billion standard cubic feet of gas into the entire domestic market which includes the NLNG supply of about 3.5 billion, the balance of 1.5 billion or a little more than that comes into the domestic market.

“That is shared between power and industries,” he added.

The GMD stated that the project which was awarded in 2015 would be inaugurated in October 2020.

Also speaking, Managing Director of NPDC Mansur Sambo said that by the completion of the plant NPDC would have achieved flare out in OML 111 and other neighbouring fields in compliance with the federal government’s directives.

Sambo explained that the Oredo IGHF plant would boost power generation in Nigeria adding that there would be more gas deliveries to the power sector.

“The largest contributor of gas to the domestic market and the power sector is NPDC,” he said.

According him, NPDC contributes about a billion standard cubic feet of gas production to the entire mix of production and majority of it goes into the domestic market.