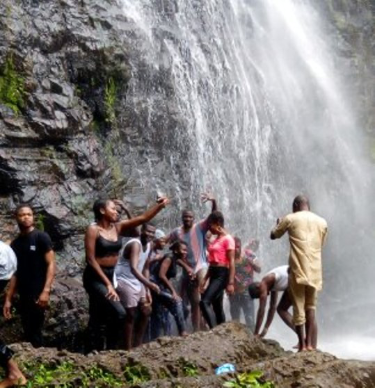 Ilorin, Aug. 18, 2020 The Kwara Government has reiterated her desire to transform the Owu Waterfall to tourism hub in the country.

The State Commissioner for Communications, Mrs Hariet Afolabi-Oshatimehin, gave the pledge during her tourism campaign tour to the waterfall site on Tuesday.

NAN also reports that it’s the highest waterfall in West Africa measuring, 120 metres above the sea level and cascades at 330 feet down an escarpment, with rocky outcrops to a pool of ice-cold water below.

Afolabi-Oshatimehin said Kwara was lucky to have been blessed with a spectacular and unique waterfall.

“Owu waterfall is a blessing to Kwara,’’ she said.

According to her, the tour is meant to enable her to see the situation on the ground and find the best way to transform Owu waterfall to a centre of tourist of international status.

“We are blessed in Kwara to have this unique water fall.

“We want Owu waterfall to gain international recognition and as well as to become a centre of attraction.

“We are here today with a team of experts to see what we can do to attract more investors and make urgent transformation.

“We want to show the world that what our people are running to see in Dubai is in Kwara.

“Owu waterfall is even natural and not artificial.

“Owu waterfall will soon become the envy of the world.

“There will be no more rush to Dubai on tourist visit and we are starting a new project for the world to see very soon,’’ the commissioner said.

Ifabibiyi commended Gov. AbdulRasaq led administration for its interest in the Owu Waterfall and assured the government of his community’s cooperation.

The royal father also appealed to the government to fix the road leading to the waterfall, saying the road was not accessible.

“We are suffering from bad roads leading to the fall.

“Please, help us fix it urgently as you start the project, we want easy access,’’ Ifabibiyi said.

The commissioner also visited the National Museum at Esie, where she commended the staffs for keeping the artefacts safe and clean.

“Esie is widely known all-over the world and we are proud of you,’’ she said.

The commissioner, however, decried how Nigerians tend to “abandon our history all in the name of civilisation’’.

“Esie Museum is a home of learning and a place to refresh our memory,’’ she said, thanking the workers for being dedicated to their work.