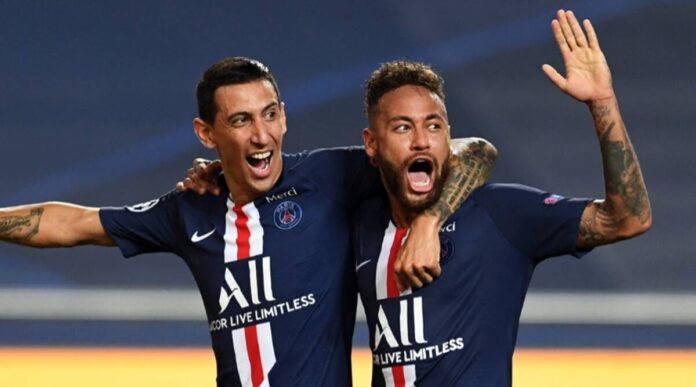 Goals from Marquinhos and Di Maria put PSG 2-0 up at the interval.

Juan Bernat added the third in the 56th minute for what was a comfortable victory at the Estadio da Luz.

The French club, who are celebrating the 50th anniversary of their founding in 1970, will meet winners of Wednesday’s other semi-final between Bayern Munich and Olympique Lyonnais.

The big-spending PSG were a step too far for Leipzig, who were playing in the regional leagues just 11 years ago.

The German side have outperformed all expectations by reaching the last four, knocking out Tottenham Hotspur and Atletico Madrid en route.

“We ate them up from minute one —— it’s going to be tough to sleep between now and the final,” said Di Maria.

“We worked hard all game and we showed we deserve to be here. It doesn’t matter who we face: either Bayern Munich or Lyon, we’ll give our all,” he added.

French World Cup-winning forward Kylian Mbappe was back in the starting line-up after fully recovering from his ankle injury.

PSG’s German coach Thomas Tuchel was then able to field his preferred attacking trident with Brazilian Neymar and Di Maria.

Right from the outset, PSG looked a threat to the Leipzig defence with Neymar clipping the post after he was slipped in by Mbappe in the sixth minute.

Seven minutes later though, PSG had the lead.

Neymar and Di Maria lined up to take a free kick on the left and it was the Argentine who floated in a lovely cross which was nodded home by Marquinhos.

Former Real Madrid and Manchester United winger Di Maria was in fine form, constantly probing, while Neymar created from deep and Mbappe pushed on to the last defender looking to use his pace.

The Germans were struggling but did threaten in the 25th minute, when Konrad Laimer burst down the right and found forward Yussuf Poulsen whose shot was just off target.

Neymar then went close with an audacious free-kick from deep and wide on the right, after the former FC Barcelona man went for Peter Gulacsi’s near post and struck it as the Hungarian goalkeeper scrambled.

It was a poor clearance from the goalkeeper which led to PSG’s second.

Leandro Paredes collected the ball and then found Neymar who cleverly flicked it with the back of his heel into the path of Di Maria who made no mistake.

Leipzig’s 33-year-old coach Julian Nagelsmann needed to find some way to shift the momentum of the game, and he made two changes at the break.

But after a bright start, PSG put the outcome beyond doubt.

Leipzig defender Nordi Mukiele slipped while attempting to clear, allowing Di Maria to cross the ball back in to the box and Bernat’s glancing header floated into the far corner.

Mbappe forced a good save out of Gulacsi as PSG pushed for a fourth while PSG goalkeeper Sergio Rico had his hands warmed by a fierce drive from fellow Spaniard Angelino.

The French club have played 110 games in the competition —— the most played by a side before reaching their first final, overtaking Arsenal’s record of 90 between 1971 and 2006.

PSG’s only other appearances in the final of a European competition came with their UEFA Cup Winners’ Cup victory in 1996 and their runners-up spot in the following season.

Olympique Marseille are the only French team to win the European Cup, triumphing over AC Milan in 1993.