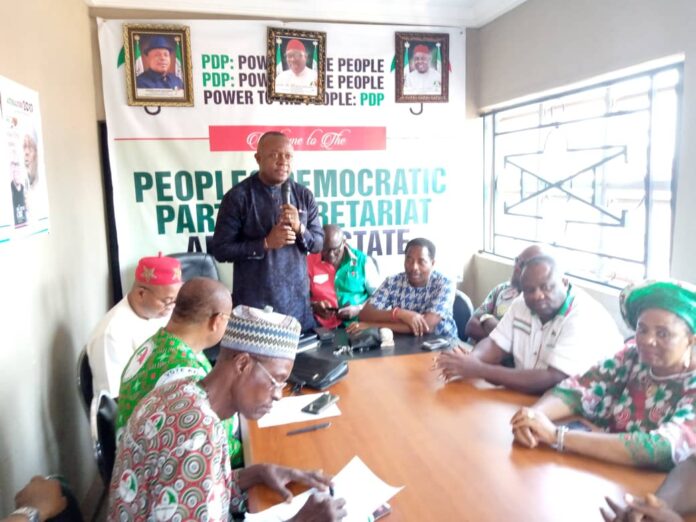 By Emmanuel Oloniruha
Abuja, Aug. 14, 2020 The National Working Committee (NWC) of the Peoples Democratic Party (PDP) on Friday upheld the elections of Sir Ndubisi Nwobu-led State Working Committee of the party in Anambra.

PDP National Publicity Secretary, Mr Kola Ologbondiyan, at a press conference in Abuja, said the NWC in its 502nd session of Wednesday, resolved to uphold the decision of the South East Zonal Working Committee of the party held on July 3.

“You are by this NWC resolution directed to recognise and enter into official Party business with the PDP Anambra chapter through the state working committee as stated above.

“You are to proceed to use all legal and official means to disband all parallel executive body as such is illegal, null and void,” Ologbondiyan said.

Naija247news recalls that the South East PDP Zonal Working Committee (ZWC) in a communiqué issued after its emergency meeting held on on July 3, made available to newsmen resolved that there would not be zoning in the upcoming Anambra governorship election.

The ZWC in the communiqué jointly signed by Deacon Austin Umahi, the National Vice Chairman, and Casmir Ugwu, the Zonal Secretary of the zone, assured all the state gubernatorial aspirants of the assurances of PDP National Chairman of a level playing field and transparent primary.

“The ZWC of our party states in very clear terms, its resolve to ensure that PDP wins the 2021 governorship election in Anambra.

“That the PDP in Anambra remains one united family under the Leadership of Nwobu, and that the secretariat of the Party at No. 1, Dr Ezidiegwu Road, Udoka Housing Estate, is the only secretariat known to the party as well as the zonal working committee, which remains open to all party faithful.

“That we seize this opportunity to call on all fifth columnists within the party to toe the part of honour and join their paymasters in other parties, as we shall be prepared to enforce all disciplinary processes to smoke them out.

“The days of merchandising with Anambra PDP is over and done with because we are determined to take the party to winning side,” the communiqué said.

The zonal working committee also called for immediate closure of illegal state party office opened in Awka, and partner with Nwobu to move the party forward in Anambra.

“In that wise, we affirm the expulsion of three officers of the party in Anambra, as all constitutional processes were followed and presented to the zonal working committee in her meeting with PDP in Anambra Exco in our zonal office.

“Commends the members of the Board of Trustees from Anambra for their sustained fatherly roles, and implores them not to relent,” it said.

The zonal working committee also requested that senators, House of Representatives members as well as members of house of assembly elected under the platform of our PDP in Anambra and indeed all stakeholders to close ranks for the success of the party.

Umahi fielding questions at the press conference on the issue of litigations on the party in Anambra, said anyone who deviated from the NWC decision would be sanctioned, saying “we must be disciplined for the party to move forward”.

Umahi said that Anamabra was very cardinal in the South East and PDP would not joke with the election.

Asked of the party’s decision on zoning arrangement for Anambra, Umahi said PDP was determined to have a credible candidate that would emerge through a free and fair primary “because the most important thing is to occupy the government house”.