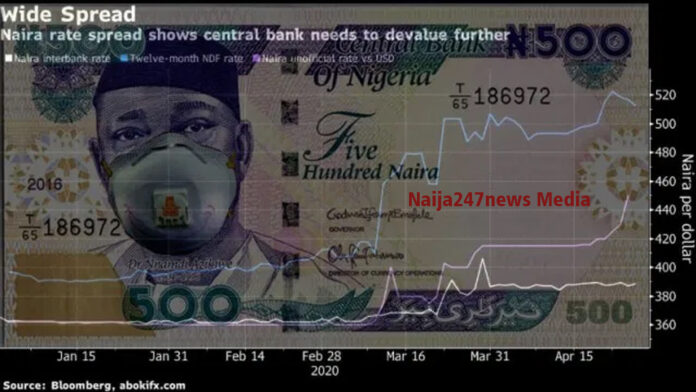 Goldman Sachs Group Inc. this week said a significant devaluation of the naira is likely in 12 to 18 months to stabilize Nigeria’s external accounts.

An exchange rate of 500-550 per dollar should bring about the desired balance, according to Goldman economists, compared with a current rate of about 407. The Nigerian central bank on Aug. 7 reduced its official rate by 5.3% to reflect depreciation during the previous month.

Nigeria’s economy had barely recovered from a slump brought on by the 2014-15 oil price collapse when coronavirus hit.

Oil accounts for around half of federal revenues and nearly all of the country’s foreign exchange, so plunging oil prices combined with lockdowns to control the virus outbreak hit the economy hard. The crisis threatens to tip Nigeria into its deepest recession for decades.

He added: “With oil prices stalling out at levels well below where they started the year, the outlook for the Nigerian economy remains poor.”

Africa’s most populous nation has long maintained several exchange rates. In addition to the interbank and black-market rates, there are official rates for consumers wanting dollars for school and medical fees abroad, for Muslims making the pilgrimage to Saudi Arabia, and for people wishing to buy hard currency at exchange bureaux.

But analysts and economists have long argued that a single rate would help to provide clarity and attract much-needed foreign investment.

Central bank governor Godwin Emefiele said last month that the bank would unify rates after the IMF in April approved Nigeria’s request for $3.4bn in emergency funding, while saying that unification of rates “should be expedited”.

The recent devaluation is “a step in the right direction,” said Temi Popoola, head of Nigeria at Renaissance Capital in Lagos. He added that “more needs to be done”, including allowing the naira to move to a more market-driven level.