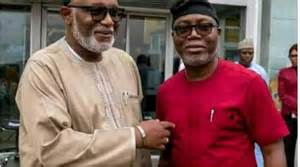 by Alaba-Olusola Oke
Akure, Aug. 7, 2020 Running mate to the Governorship Candidate of All Progressives Congress (APC) in Ondo State Oct. 10 govership poll, Mr Lucky Aiyedatiwa, says he will be loyal to his principal and the party if they win the election.
Aiyedatiwa made the promise when he received the leadership of the party from Ondo Southern Senatorial District of the state on Friday in Akure.
He vowed to be entirely loyal and committed to the vision of his principal, Gov. Oluwarotimi Akeredolu, whose disposition toward him had left him elated and relaxed.
“The governor’s speeches and comments give no room for me to do otherwise; I have no option than to be loyal to him, and committed to whatever assignments I am given.
“His disposition toward me has placed so much pressure on me, and further reinforced the need for total loyalty,” he said.
Aiyedatiwa dismissed the insinuation that the position would alter his relationship with his people.
“Appointment or no appointment, I always prefer to live my natural life, and it’s part of my core character,” he said.
He urged the party executives to roll up their sleeves for the task ahead, arguing that the party needed to cover more grounds to ensure victory in the governorship poll.
“There are some local government areas where we have lots of work to do ahead of the October governorship election,” Aiyedatiwa said.
Earlier, the Ondo South Senatorial Chairman of the party, Dr Adedeji Oyedele, told Aiyedatiwa that the visit was to underscore the zone’s acceptance of his choice as the running mate.
Oyedele said the leadership of the party in the south would support and work heartily with Aiyedatiwa as the new symbol of APC in the south senatorial district.