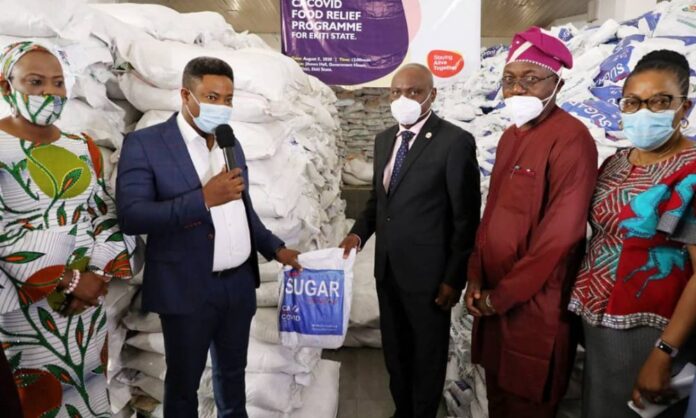 By Ariwodola Idowu
Ado Ekiti, Aug. 5, 2020 Gov. Kayode Fayemi of Ekiti on Wednesday disclosed that his administration had so far distributed over 60,000 food packs to vulnerable persons to cushion the effect of the COVID-19 pandemic.

Fayemi stated this at the flag off of the private sector sponsored Coalition Against COVID-19 (CACOVID) food relief programme for Ekiti.

He also announced a new phase of the food palliative exercise, saying government was committed to continually cushioning the effect of the pandemic through food and material support to vulnerable persons.

The governor, represented by the Secretary to the State Government, Mr Abiodun Oyebanji, appreciated the leadership of CACOVID for bringing succor to the people of the state.

He noted that the present administration had been proactive in tackling the effects of the pandemic, adding that the distribution channels to households in the state had been effective.

The governor further said that from the feedback mechanism, the food packs got to the targeted people.

“On behalf of Ekiti state government, I express gratitude to CACOVID for the honour and support to the government and the people.

“ What is happening today in Ekiti State is a testimony to what is possible when the private sector decides to collaborate with public institutions.

” I wish to commend them by this strategic intervention of bringing succor to lots of families in Nigeria, including Ekiti State.

“ As a government, we have been proactive in tackling the effect of the pandemic and lockdown on our people. As at today, the government has distributed over 60,000 food packs to households in the state,” Fayemi said.

He noted that the government also reached out to various unions, associations and people with disabilities.

“ It will interest you to also note that beneficiaries of our interventions are the registered vulnerables compiled by the Ministry of Budget and Planning and supervised by the World Bank.

” The implication is that our intervention is devoid of politics, religious sentiments and primordial consideration.

“So, as long as you are a citizen of Ekiti, irrespective of your political inclination, government is willing to assist you.

”Because COVID-19 does not know anybody, it doesn’t know political party and whether you are Muslim of Christian. As long as you are from this state or you live here, we have intervened,” he said.

The governor assured CACOVID that the items would be judiciously distributed.

Earlier, a representative of CACOVID, Mr Kayode Adejuyigbe, said the effort was part of the collective responsibility in the fight against COVID-19 in Ekiti and Nigeria in general.

Adejuyigbe said CACOVID was a joint initiative of leading private sector operators in Lagos and the Central Bank of Nigeria, launched to galvanise support in the fight against COVID-19.

He noted that the fight for survival had become a necessity which should not be the sole responsibility of the government.

Adejuyigbe disclosed that the coalition, in collaboration with state governments, had commissioned 38 isolation centres in the country.

He said that this was in addition to assisting in improving the testing capacity of NCDC with the donation of over 100,000 test kits at various centres.

NAN reports that top government functionaries at the event included the Chief of Staff to the Governor, Biodun Omoleye and Special Adviser on Development Partnerships, Mrs Margaret. 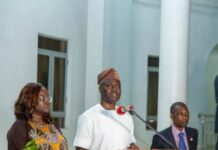 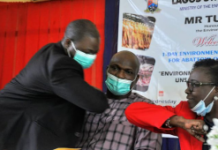 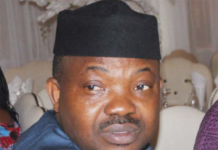