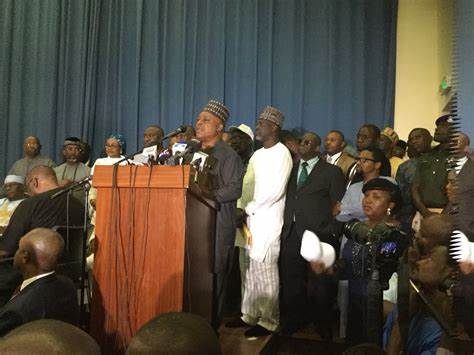 By Emmanuel Oloniruha
Abuja, Aug. 5, 2020 The Coalition of United Political Parties (CUPP) has requested the citizenry and security personnel to respect the rights of Nigerians to stage peaceful protests.
CUPP National Secretary, Chief Peter Ameh, the CUPP National Secretary, in a statement he issued on Wednesday in Abuja, criticised alleged attacks on peaceful protesters in different parts of the country.
Ameh said, “Nigeria is a democratic state, as such, citizens are afforded the constitutional right to engage in peaceful protests.”
He called on the presidency to hold the police and other security agencies accountable for attacks and infringement on the rights of the masses.
Ameh urged President Muhammad Buhari to protect the light of democracy handed over to him by the electorate.
He advised security agencies to apply its force on bandits attacking residents in Southern Kaduna and North East to solve the insecurity situation in the areas rather than focus on innocent civilians.
“The essence of freedom of expression and of the press is for those who may not have their way on crucial national issues to at least have their say.
“Nigerians want good governance and dividends of democracy not carnage,” Ameh said.

May29: Buhari’s administration pulled Nigeria back by 60 years

Why we rejected Atiku’s endorsement by Ohaneze – Anambra govt.