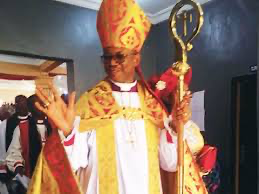 By Sam Oditah
Umuahia, Aug. 5, 2020 The Diocese of Umuahia Anglican Communion has ended its ninth synod with an appeal to the Federal Government to establish new industries and resuscitate the ailing ones to create employment opportunities.

The appeal was contained in a two-page communique issued in Umuahia on Wednesday.

It was jointly signed by the Diocesan Bishop and President of the synod, Bishop Geoffery Ibeabuchi, and Clerical Synod Secretary, Ven. Okwukwe Ucheagwu.

The synod opined that reviving the moribund industries would help to create employment for the nation’s teeming unemployed youths and check the rising crime rate.

It stated, “That government should establish industries, rehabilitate ailing ones and also create an enabling environment for our teeming youths to be employed.”

It called for an end to the Federal Government’s foreign borrowings and stressed the need for the diversification of the economy from oil to investment in mining and agriculture.

It decried the deteriorating security situation in the country and called for an overhaul of the nation’s security strategies, stating “their best is not good enough.”

It urged the Federal Government and security agencies to intensify efforts to secure the release of Leah Shuaibu and other captives of the Boko Haram insurgents.

The conference called on the federal government to ensure that no section of the country was marginlised in the distribution of the nation’s resources and federal appointments.

It called for stiffer punishment for convicted rapists to serve as deterent to others.

“The act of rape and other related offences should be punished severely, while the victims should be properly rehabilitated,” it stated.

It called for compensation to victims of herders’ attacks, especially victims of rape, abduction and those whose farms were destroyed.

It recommended “proper restructuring of the country for the benefit of the citizenry.”

It also called for the rehabilitation of the rail system in the South-East, adding that work on the second Niger Bridge should be expidited.

Journalists reports that the synod, with the theme: “the Lord is with us”, took place from July 29 to Aug. 2 at St. Andrew’s Anglican Church, Isiama Afara in Umuahia.

AfCFTA must be backed by adequate policies -Lawan