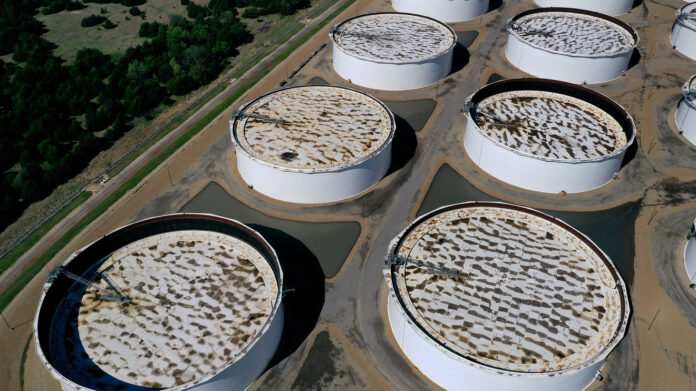 An unexpected weekly rise in gasoline supplies, however, tempered the rise for oil as worries about slow demand growth prevailed.

The latest fall compared with an average forecast by analysts polled by S&P Global Platts for a decline of 1.2 million barrels. The American Petroleum Institute on Tuesday reported a decrease of 6.8 million barrels.

The size of the crude supply decline was a surprise, but “looking deeper into the numbers we saw a build in gasoline stockpiles as well as distillates,” Tariq Zahir, managing member at Tyche Capital Advisors, told MarketWatch.

Even with “all the bullish headlines out there with a large crude oil draw” and U.S. dollar weakness, “we feel it is quite telling” that crude oil can’t move much higher, he said. The ICE U.S. Dollar Index DXY, -0.41%, a measure of the U.S. currency against a basket of six major rivals, was down 0.4% Wednesday after edging to a two-year low.

The gasoline build shows “demand for driving is not going higher as it usually does at this time of year,” said Zahir, and as many people continue to work from home, that will keep demand low for crude oil in the near term.

The EIA data also showed crude stocks at the Cushing, Okla., storage hub edged up by about 1.3 million barrels for the week, but total oil production was unchanged at 11.1 million barrels per day.

Refinery activity climbed, with refineries operating at 79.5% of capacity last week, up from 77.9% a week earlier, according to the EIA.

Gasoline supply rose 700,000 barrels, while distillate stockpiles added 500,000 barrels. The S&P Global Platts survey had shown expectations for a supply decline of 2 million barrels for gasoline and for inventories of distillates to stand unchanged for the week.

Over the past four weeks, motor gasoline product supplied, a proxy for demand, averaged 8.7 million barrels a day, down by 9% from the same period last year, the EIA said.

Oil and petroleum products showed little, if any, reaction to the U.S. Federal Reserve’s statement Wednesday. The Fed said it would keep interest rates near zero until unemployment recovers and inflation picks up.

“Rising coronavirus cases in the United States have fostered doubts about the strength of the current economic recovery,” he told MarketWatch. “Fears around another round of lockdowns are likely to cap oil prices in the near term.”

Looking at the technical picture, Lukman said WTI crude remains in a $2 range with support at $40 and resistance at $42, and a move back below $40 potentially triggering a decline towards $36.

The EIA on Thursday is expected to report a weekly climb of 23 billion cubic feet in natural-gas supplies, according to a survey of analysts conducted by S&P Global Platts.