Nigeria’s cocoa-industry association cut its output estimate for the 2019-20 season by 18%, citing the spread of the fungal black pod disease caused by heavy rains in the country’s main growing areas.

The current season’s production is now expected to drop to 148,750 tons from the previous estimate of 181,475 tons, according to Mufutau Abolarinwa, president of the Cocoa Association of Nigeria, which groups farmers, traders and processors of the chocolate ingredient. An earlier projection saw production at 215,500 tons.

“Rainfall in the last few weeks has been heavy, leaving no chance for farmers to tend the farms,” Abolarinwa said by phone from the southwest cocoa-trading center of Akure. “We should be expecting a shortfall from the effect of the black pod on potential harvest.”

Nigeria, fifth-biggest cocoa producer, has two cocoa harvests, with the main crop happening between October and December, and the smaller, second crop maturing from April to June. 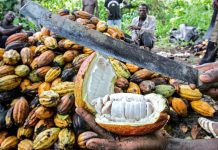 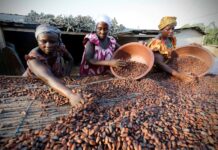 Exporters lament over 30,000 tons of cocoa trapped due to decayed...

Why Nigeria’s plans to partner Cameroon on cocoa premium will not...