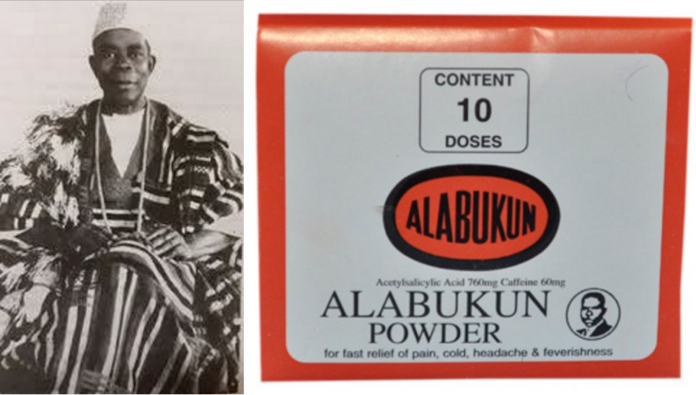 Nigerians do vouch for this drug. From minor headaches, migraine, sore throat to preventing blood clots and stroke, the 100-year-old Alabukun Powder, Nigeria’s first homegrown modern drug, which is seen as a cure-all, has stood the test of time.

Without any significant advertising or commercial, Alabukun remains popular among Nigerians and even across the world, including the UK and U.S.

In Nigeria, where it has become a household name, the red and white packaged drug can be found displayed and sold in thousands of pharmacies, markets and roadside stalls. Alabukun products are also sold in several towns and cities in Europe, Brazil, Jamaica, and China.
Even though many Nigerians use it as an over-the-counter drug largely as a mild analgesic for headache and other simple illnesses, some patrons say the local drug has saved them from a host of other ailments, including chronic rheumatism, arthritis, myocardial infarction, ischaemic attacks, and the above-mentioned conditions.

All these have been made possible by Jacob Sogboyega Odulate, the Nigerian businessman and entrepreneur who invented the drug in 1918 that would ultimately be known as the famous patented medicine, Alabukun Powder.

Popularly known as Blessed Jacob, the Nigerian pharmacist and inventor was born in 1884 in Ikorodu in Lagos State but later moved to the neighbouring Ogun State, Nigeria.

Image result for Jacob Sogboyega Odulate
Jacob Sogboyega Odulate invented the Alabukun Powder in 1918. Pic credit: Nigerian Monitor
A determined man right from his young days, Odulate would embark on a three-month exploratory journey on foot to establish himself in Abeokuta, where he would build his modest laboratory in the Sapon area of Abeokuta, Ogun State, south-western Nigeria.

That laboratory, which also served as his consulting room, gave birth to the Alabukun brand that has lasted a century and currently competing with other brands, both local and foreign.

Odulate managed to create this indigenous pharmaceutical brand despite the obstacles that the British colonial authorities at the time placed in the path of most local businessmen and natives.

Being a black man within the colonial times in the 1910s, many felt that it would have been difficult for him to succeed, but Odulate “penetrated the fortress of British-dominated commercial enterprise in nascent Nigeria, to become one of a very small group of Nigerian entrepreneurs in the colony”, writes the News Express.

“The pharmacodynamics of Alabukun powder show that it functions by preventing the production of platelet aggregation and inhibits adenosine in the body. These functions reduce pain and allow the user to breath better by stimulating the brain and the heart,” writes SciTech Africa.

When Odulate started Alabukun powder, he produced other brands like Alabukun mentholine and an annual journal called Alabukun Almanac which was widely distributed in Nigeria between the 1920s and 1950s.

As of 2017, the century-old Alabukun business has been passed down three generations. This has been described as a great achievement as there is hardly any Nigerian indigenous business with such a record.

Alabukun has also become one of the longest-running, indigenous pharmaceutical brands in Africa. The ‘magic powder’ remains in high demand even after 100 years.

Reasons why some people can’t abide by COVID-19 precautionary measures.

WHO scales up COVID-19, TB search with mobile testing in Kaduna...