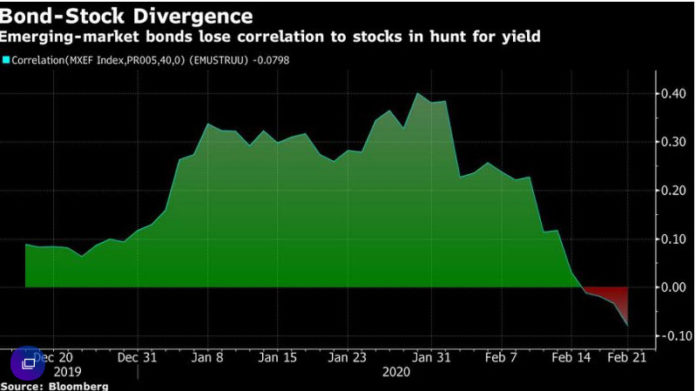 Emerging-market bonds are on fire, but there’s a worrying subtext to the rally as investors grow increasingly concerned about the long-term economic impact of the coronavirus.

While the dollar-denominated debt of developing nations advanced for an 11th week in the five days through Friday, the longest winning streak in eight years, indexes of stocks and currencies retreated as the spread of the virus showed few signs of slowing. That’s left bonds more disconnected from stocks and currencies than at any time this year.

The divergence underlines the concern that the rally may have less to do with the strength of emerging economies than the scramble for returns in a world where demand for havens is sending yields in the biggest economies ever lower.

Warren Buffett, speaking to CNBC on Monday, said investors such as life insurers were “stupid” but “very human” for responding to low interest rates by taking more risks.

The yield on the benchmark 30-year U.S. Treasury bond dropped to an all-time low on Friday as the number of infections outside of China accelerated, fueling worries the epidemic will dent the world economy. U.S. 10-year yields fell below 1.4% on Monday for the first time since mid-2016.

“The search for yield is supported by a perception that global yields will remain low for the foreseeable future,” said Anders Faergemann, a London-based senior portfolio manager at PineBridge Investments, which manages about $100 billion. “Yet, the resilience we have seen in EM hard-currency bonds — both sovereign and corporate — tells a story of continued support for the asset class and further capital inflows.”

MSCI Inc.’s index of emerging currencies dropped last week for the fourth week in five, sinking below its 100- and 200-day moving averages, levels that signal the potential for further declines. The MSCI stocks gauge slumped 2%.

It may not be as gloomy as some fear. Sara Grut and Caesar Maasry, analysts at Goldman Sachs Group Inc., say the relative safety of emerging-market debt is being driven by expectations that the virus’s impact will be temporary, and that easing by central banks will reduce the risk that the turmoil leads to defaults or restructurings.

“The downside risks, which tend to matter most for the pricing of credit risks, appear relatively contained,” they said in a note. The drawback, though, is that bonds may be less likely to rally along with equities and currencies if the virus is contained and sentiment improves, they wrote.

In South Korea, where the government raised the country’s infectious-disease alert to the highest level following a surge in new cases, the central bank was due to convene an emergency meeting Monday related to the coronavirus outbreak, ahead of the scheduled monetary-policy meeting on Thursday.

“It is no longer the problem of whether the Bank of Korea will cut or not, it is now whether it will cut once or twice,” said Min Gyeong-won, an economist at Woori Bank.

As policy makers struggle to find new ways to boost growth, attention is turning to fiscal policy. China said it will increase fiscal and monetary stimulus this year, while Malaysia will unveil an extra economic-stimulus package on Thursday. The start of February data releases will also give investors a clearer picture of the virus’s impact on global growth.

Coronavirus concerns aside, Malaysian Prime Minister Mahathir Mohamad submitted his resignation to the king on Monday, and his party exited the ruling coalition after infighting over his successor came to a head. South African Finance Minister Tito Mboweni budget’s on Wednesday could be key to determining whether Moody’s Investors Service downgrades the nation’s debt to junk. Argentina’s debt negotiations will continue, while Lebanon’s bondholders are bracing for a potential default next month.

China will report official gauges of manufacturing and services for February on Saturday, providing clues on how badly the world’s second-largest economy has been hit by the virusThe country is slowly getting back to work, with the economy running at 50%-60% capacity in the week to Feb. 21 and forecast to jump from Feb. 24, according to Bloomberg EconomicsRead: CHINA REACT: Small Companies Suffer from Virus, Support Urgent

China’s economy is likely to pick up quickly after the coronavirus is contained and stage a “V-shaped” recovery, according to a senior official with the nation’s central bank

The “sound” fundamentals of the domestic economy remain unchanged in the medium to long run, Chen Yulu, a deputy governor at the People’s Bank of China, wrote in an opinion piece in the Financial Times dated Feb. 20While emerging Asian currencies are likely to weaken further, the Chinese yuan will be more resilient as policy makers seek to slow its decline, Mansoor Mohi-uddin, a Singapore-based senior strategist at NatWest Markets, wrote in a reportThe yuan fell for a third day on Monday to touch the weakest level in more than two months

The chance of a 25 basis-point rate cut in South Korea is on the rise because domestic consumption may take a hit as virus concerns intensify, Eugene Leow, a rates strategist at DBS Group Holdings Ltd., wrote in a note. Exports — a key driver of the economy — are under threat as the outbreak rattles global supply chains and hurts demand.DBS had expected the BOK to wait until April before lowering the key rate, which is already at a record low. Policy ammunition is limited given the current rate of 1.25%, when adjusted for inflation, is already at minus 0.25%, according to the Singapore-based bankGovernor Lee Ju-yeol said this month authorities would need more time and economic data to assess the impact of the virus, downplaying growing speculation the bank may need to ease policy. The number of virus cases locally has surgedThe won is the worst performer in Asia this year after the Thai bahtElsewhere, central banks in Israel and Hungary will probably keep interest rates unchangedMozambique and Botswana will also decide on monetary policy

Hong Kong will announce its budget on Wednesday. Bloomberg Economics expects the budget deficit for fiscal 2020-2021 could reach more than HK$65 billion ($8.4 billion), or about 2% of gross domestic productMalaysia has already widened its deficit target for fiscal 2020 to 3.2% of GDP, from 3%Indonesia is backing calls for a coordinated global response to the coronavirus outbreak, warning that authorities may be underestimating its impact on trade and economic growth

With South Africa’s investment-grade credit rating hanging by a thread, Finance Minister Mboweni will have to convince rating companies and investors that a rescue plan for the debt-ridden state electricity company Eskom Holdings SOC Ltd. is on track, and that the government is ready to take measures to curb rising debt, narrow the budget deficit and fuel economic growthBailouts for state-owned companies including Eskom and South African Airways have pushed up government debt in an economy growing at less than 1% a year and collecting insufficient revenueThe rand is the worst-performing emerging-market currency this year after Brazil’s real

The U.S. will sign military deals worth more than $3 billion with India on Tuesday, President Donald Trump said at the start of a two-day state visit to the South Asian nationTrump also reiterated his pledge that the U.S. would make a significant trade deal with IndiaIndia will release fourth-quarter GDP data on Friday. Emerging Asia’s second-largest economy probably grew 4.7% from a year earlier, compared with 4.5% in the prior quarter, according to a Bloomberg survey

Argentina Economy Minister Martin Guzman and International Monetary Fund Managing Director Kristalina Georgieva discussed plans for a “secure and orderly resolution” of Argentina’s debt situation, the IMF said on SaturdayThe nation will probably release December data that show wages once again rose less than inflation, according to Bloomberg EconomicsLebanon has chosen Lazard and Cleary Gottlieb Steen & Hamilton to advise it on a possible debt restructuring, Beirut-based L’Orient Le Jour newspaper says, citing two people with knowledge of the matterThe government is warming to the idea of a IMF financial bailout, which would likely be around $25 billion, MUFG Bank Ltd. said in a research noteThe nation was downgraded deeper into junk by two of the three biggest credit-rating companies Friday. The moves capped a week for Lebanon in which a bank run intensified, the World Bank warned of “implosion” and the yield on the government’s Eurobonds maturing next month surpassed 1,000%“Investors are following the situation in Argentina and Lebanon for clues about potential debt restructurings,” said Faergemann at PineBridge. “We don’t expect any serious contagion to other markets”

Gross domestic product in Africa’s largest oil producer grew 2.55% in the three months through December from a year earlier, compared with 2.3% in the third quarterTurkey’s economic growth accelerated to 5% year-on-year in the fourth quarter, from 0.9%, as interest rate cuts and a weakening currency helped fuel output, according to the median estimate of economists in a Bloomberg survey. The data are due FridayNorway’s sovereign wealth fund, the world’s biggest, publishes its annual report on Thursday. The fund said less than a year ago it got the go-ahead to cut government and corporate bonds from emerging markets in an overhaul of its fixed-income holdingsMexico’s central bank will release its quarterly inflation report on Wednesday and meeting minutes on Thursday, which may shed light on its economic health and future policy stance. Final fourth-quarter GDP figures are expected to be released on Tuesday. Bloomberg Economics expects a wider than initially estimated contractionBrazil’s week is shortened by the Carnival holiday, with markets resuming trading on Wednesday afternoon. Investors will look for January primary budget balance data on FridayChilean unemployment, copper production and retail sales figures on Friday will inform investors weighing the risks of a constitutional referendum in April

To contact the reporters on this story: Netty Ismail in Dubai at nismail3@bloomberg.net;Lilian Karunungan in Singapore at lkarunungan@bloomberg.net;Robert Brand in Cape Town at rbrand9@bloomberg.net;Sydney Maki in New York at smaki8@bloomberg.net

To contact the editors responsible for this story: Alex Nicholson at anicholson6@bloomberg.net, Justin Carrigan, Paul Wallace

For more articles like this, please visit us at bloomberg.com

Subscribe now to stay ahead with the most trusted business news source. 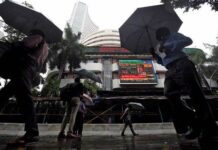 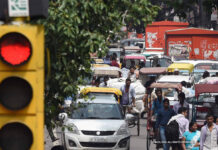 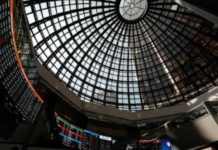 Emerging markets will recover in 2019 as external factors stabilize: StanChart