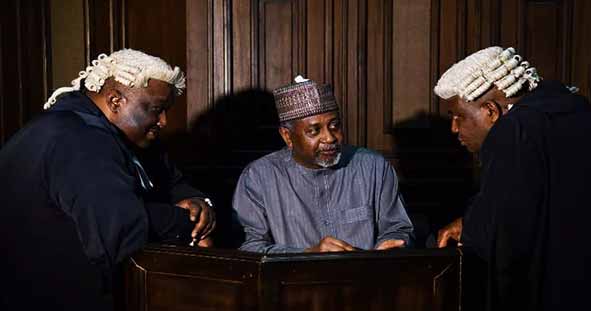 A former National Security Adviser, Sambo Dasuki, on Thursday, made his first court appearance after his release from a four-year detention.

The ex-NSA was detained in spite of the bail granted him on numerous occasions by various courts.

On Thursday, he appeared before Justice Ahmed Mohammed of the Federal High Court in Abuja for his trial on charges of money laundering and illegal possession of firearms instituted against him in 2015 by the Office of the Attorney-General of the Federation.

The ex-NSA, who appeared more relaxed than he looked in his previous court appearances, opted to remain standing in the dock even when the judge offered that he should sit.

There are two separate sets of charges of alleged diversion of funds earmarked for procurement of arms meant for fighting Boko Haram in the North-East pending against him at the High Court of the Federal Capital Territory in Abuja.

But none of the two other cases has come up since December 24, 2019, when he was released from the custody of the Department of State Services.

At the Thursday’s proceedings before Justice Mohammed of the Federal High Court, Dasuki, through his lawyer, Olukayode Ariwoola, withdrew two separate applications he filed in protest against the continuation of trial without being released from illegal custody.

In withdrawing the applications on Thursday, Ariwoola said they had been overtaken by the event of the release of his client.

“The two applications have been overtaken by event because our client was released on December 24, 2019.

“In the circumstance, we apply to withdraw the applications.”

Responding, the prosecuting counsel, Mr Dipo Okpeseyi(SAN), said he had no objection to the request to have the applications withdrawn.

The judge subsequently struck out the applications and adjourned trial till March 11 and 12.

In the application filed on December 11, 2018, Dasuki sought “an order to adjourn sine die (indefinitely) the trial and/or further trial of the defendant in this case pending compliance by the complainant with this honourable court’s judgment per (delivered by) Hon. Justice Ijeoma Ojukwu on July 2, 2018.”

In the other application filed on January 8, 2019, Dasuki urged Justice Mohammed to invite some senior lawyers, including the current and two past presidents of the Nigerian Bar Association, to address issues relating to his detention.

The Senior Advocates of Nigeria, whom Dasuki proposed to be invited to contribute to the arguments on the issue, included the incumbent NBA President, Mr Paul Usoro, and two of his predecessors, Chief Wole Olanipekun, and Mr Olisa Agbakoba.

The rest of the SANs are human rights lawyer, Mr Femi Falana; a professor of Law, Konyinsola Ajayi, and Mr Onyechi Ikpeazu.

“I know as a fact that the above enumerated amici curiae (friends of the court) have been listed because they are major legal giants and stakeholders in the legal profession,” the application stated in part.

It added that the court was at liberty to invite others it might deem fit.

Justifying his request to have the senior lawyers invited as amici curiae, Dasuki argued that his continued detention in violation of court orders had far-reaching implications on criminal proceedings, viability of the Nigerian constitution and authority of the bench in the country.

An affidavit filed in support of the fresh application accused the Attorney-General of the Federation and Minister of Justice, Mr Abubakar Malami (SAN), of not finding anything wrong in the alleged continued violation of the court orders.

Apart from filing the two applications, Dasuki had also taken other steps to express his displeasure about standing trial while being held in illegal detention.

In November 2018, Dasuki wrote to the court that he no longer wanted to attend his trial until the government complied with the court orders directing him to be released from custody.

In fulfilment of the vow, the ex-NSA refused to attend court from custody on a number of occasions.

He and Omoyele Sowore, publisher of Sahara Reporters was released from custody on December 24, 2019 following domestic and international outrage against the disregard to court orders and rule of law by the regime of the President, Major General Muhammadu (retd.).