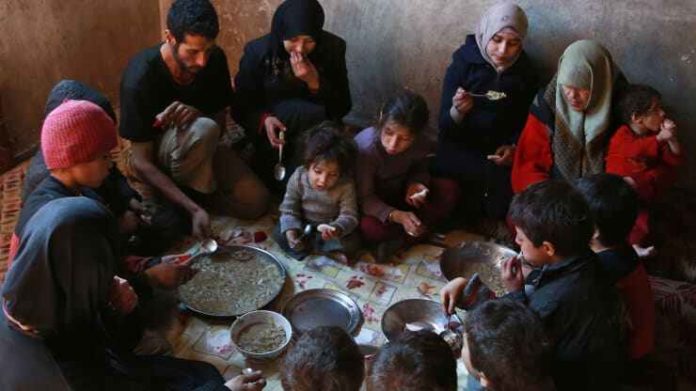 A sustained increase in food prices is unlikely to cause a global economic recession, but it could cause a “humanitarian crisis on a global scale,” the investment bank wrote.
Of the 50 countries most vulnerable to food price surges, all but four are emerging market economies, Nomura noted in a recent report.
People in these countries spend a large share of their income on food, shelter, and other necessities, the bank said.

A surge in food prices could cause a massive humanitarian crisis as more than half the world’s population is vulnerable to such a risk, Nomura wrote in a recent note.

By its count, the bank said the 50 most vulnerable countries in its index make up just 26.1% of global GDP, but 59.1% of the world. Of those countries, all but four are developing economies, Nomura noted in a recent report.

“The vulnerability to a food price surge is very much an EM phenomenon,” Nomura noted.

Concentrated in Africa, the Middle East, and Asia, Nomura said these countries tend to have lower nominal GDP per capita, a high share of food in household consumption, and are large net food importers. The bank said several of the economies most exposed are already “war-torn and suffer from extreme poverty.”

According to the Nomura Food Vulnerability Index, the five countries most vulnerable to a sustained rise in food prices are:

People in these countries spend a large share of their income on food, shelter, and other necessities, the bank said. As prices increase, they’ll spend an even bigger proportion of their incomes on food, at the expense of other essentials, Nomura said.

For example, Libya’s net food imports stood at 9.1% of GDP, according to data from the Food and Agriculture Organization (FAO) of the United Nations that Nomura used in its report. Meanwhile, New Zealand — which was ranked as least vulnerable to food price inflation — had a net food export value of 9.5% of GDP.

While 22% of Libyan households are involved in agricultural activities, like crop or livestock production, nearly all of them consume what they produce, according to a 2018 FAO report. Still, increasing agricultural production further would increase the food security of Libyans, and buffer them against future shocks.

“This is true for individual households as well as for Libya as a whole, which had seen stagnation in its agriculture sector and an increasing dependence upon food imports in the years leading up to the crisis,” wrote the FAO.

Inflation in China is heading to around 6%, says Nomura
Politics and surges in food prices

Nomura noted that climate change, higher oil prices and a depreciation in the U.S. dollar could all trigger an increase in food prices. And when food prices rise, Nomura said concerns over food security could result in social unrest, and eventually push governments to intervene via reducing their exports.

Between June 2010 and February 2011, the Food and Agriculture Organization of the United Nations food price index surged by 41%. That surge contributed to the Arab Spring protests, Nomura’s chief economist, Robert Subbaraman, told CNBC.

This will start to become an “amplifier to cause food prices to go higher,” Subbaraman said. “No one wants to trade their food, especially those that … are net exporters of food,” he added.

Apple just announced a stock split — here’s what that means...