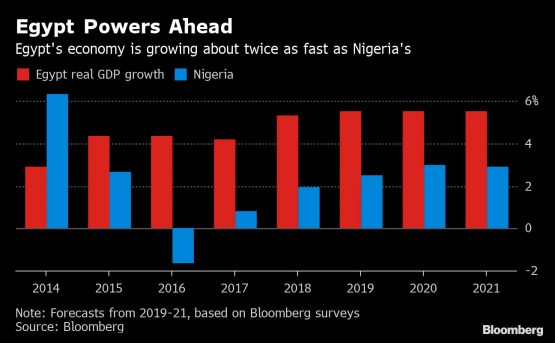 One of the clearest signs that Egypt is starting to reap the economic benefits of a currency float almost three years ago came last week. Nigeria, which took a different path when faced with similar problems, is still struggling.

Inflation in Egypt, Africa’s third-biggest economy, slowed to single digits for the first time since the pound was floated in late 2016. It had rocketed as high as 33% soon after. President Abdel-Fattah El-Sisi’s administration said a devaluation was needed to ease severe shortages of foreign exchange and get a $12 billion loan from the International Monetary Fund.

Though the decision was painful for Egyptians, it turned the Arab nation into a darling of bond and carry traders. And it set Egypt apart from Nigeria. Africa’s biggest oil producer was also suffering from a dollar squeeze, but opted instead to keep a tight grip on its currency via a system of multiple exchange rates and import restrictions. Foreign exchange is no longer scarce, though Nigeria’s inflation rate was 11.2% in June — one of the highest levels on the continent — and has been above the central bank’s target of 6% to 9% for four years.

Egypt is also looking the healthier of the two in terms of economic growth. Its output will expand 5.5% in 2019, more than twice as much as Nigeria’s and the most among Middle Eastern nations, according to Bloomberg surveys of analysts.

Portfolio flows into Egypt soared following the devaluation and the start of IMF-supported reforms, which included cutting subsidies that soaked up much of the budget. And it got more foreign direct investment last year than anywhere else in Africa, according to the United Nations.

Dollar earnings of Egyptian companies rise to a record

It’s a turnaround for a country which, in November 2016, was forced to liberalize an overvalued currency and cut subsidies to get a $12 billion bailout from the International Monetary Fund. The measures, aimed at easing a dollar squeeze, initially caused inflation to accelerate to 33% and sent earnings plunging.

Today, it’s inflation that’s near a record low. Foreign currency reserves are booming and the stock market is 62% bigger than its post-float low. Projections for economic growth of 5.6% this year and the pound’s best annual performance since at least 1999 are firing up earnings.

Earnings estimates are back at pre-float levels

Nigeria has attracted plenty of hot money by keeping bond yields high and pledging not to let the naira weaken, but FDI has plunged.

Those hot-money flows and rising oil prices have caused Nigeria’s local and external bonds to perform solidly in 2019. But weak growth has turned investors off stocks. The main equity index in Lagos has lost 10% in dollar terms this year, one of the worst performances globally.

Political and security risks remain high in both countries, according to Bloomberg Country Risk Scores. Egypt’s risk has climbed since El-Sisi came to power in 2014. His administration is trying to quell an Islamic State-linked insurgency in the Sinai Peninsula and has jailed tens of thousands of political opponents. Lawmakers passed a constitutional change in April that allows for him to remain in office until 2030. In Nigeria, which is also battling Islamic State militants and experiencing deadly clashes between farmers and herders, political risk is deemed higher.

Nigeria’s excess crude account stood at $324.54 million as of November 20, the accountant general said on Thursday.
Reviewing the external reserves movement, Nnanna said external reserves had trended downwards in recent months, declining from US$43.971 billion as at July 31, 2019 to US$ 41.79 billion as at September 16, 2019 or by US$ 2.181 billion or 4.9 percent.