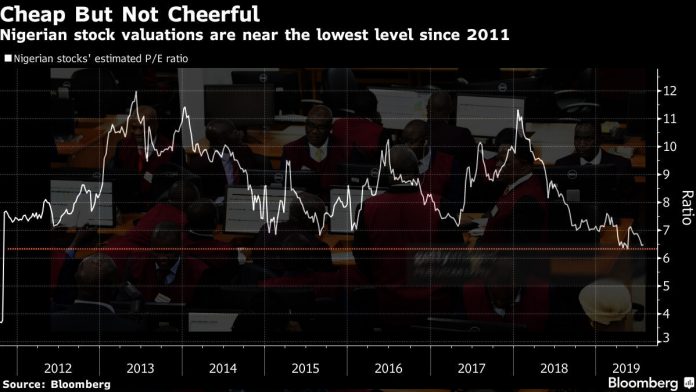 In the just concluded week, October inflation report released by National Bureau of Statistics showed that headline inflation rate rose to 11.61% year-on-year (from 11.24% in September 2019), a sharp increase, and the highest in 17 months.

The northward trend in annual inflation was chiefly due to the sustained increase in annual food inflation.

This was despite the gentle downturn in core inflation rate which has remained in single-digit. Specifically, annual food inflation rate jumped to 14.09% in October 2019 from 13.57% in September 2019.

Imported food index rose by 1.27% m-o-m amid sustained depreciation of the Naira against the USD at the interbank window where two months moving average foreign exchange rate rose m-o-m by 0.04% to N358.09/USD in October 2019.

In another development, the Nigerian Stock Exchange (NSE) released its report on domestic and foreign portfolio participation in equities trading for the month of October 2019 and showed that equities market transactions increased when compared with the equities trades done in September 2019.

However, retail investors shunned the equities market in October as transactions from this group moderated by 21.96% to N18.23 billion from N23.26 billion.

Following the decision of the foreign portfolio investors to reduce their stakes in the equities market, the total FPIs transactions to total local investors participation ratio tilted to “64:36” in October from “67:33” in September.

However, NSE Insurance index increased by 3.62% to close at 120.20 points. We expect the rise in annual inflation rate to be sustained in the coming months in 2019 as food prices increase amid border closure and year-end festive season.

In the interim, we expect investors to gravitate towards equities market given its cheap valuation. Expected dividend yield of some stocks such as Zenith, CAP and Conoil are currently above 10%.

More so, we commend the domestic institutional investors for taking the initiative to position in the equities market as the foreign portfolio investors offload some of their stocks.

Nigeria risk economic recession if oil falls to $10 a barrel,...