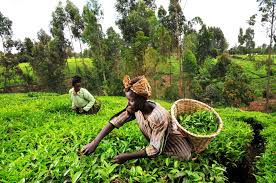 NAIROBI (Reuters) – Kenya’s tea production fell 8.5% in the first nine months of the year to 316.80 million kilogrammes, from the same period a year earlier, mainly due to dry weather conditions, the industry regulator said in a report seen by Reuters on Tuesday.

The East African nation is the leading exporter of black tea in the world and the crop is also one of its top foreign exchange earners, along with tourism, flower exports and cash sent home by the diaspora.

Officials in the industry say producers are going through a crisis after a glut in the market pushed prices to their lowest levels in more than five years. [nL8N24Y4BT]

The average price of tea at the weekly auction in the port city of Mombasa slid to $2.19 per kg during the nine-month period, from $2.65 in the same period last year, the state regulator, Tea Directorate, said.

Total exports edged down to 37.25 million kilogrammes from 37.49 million a year before, the directorate said.