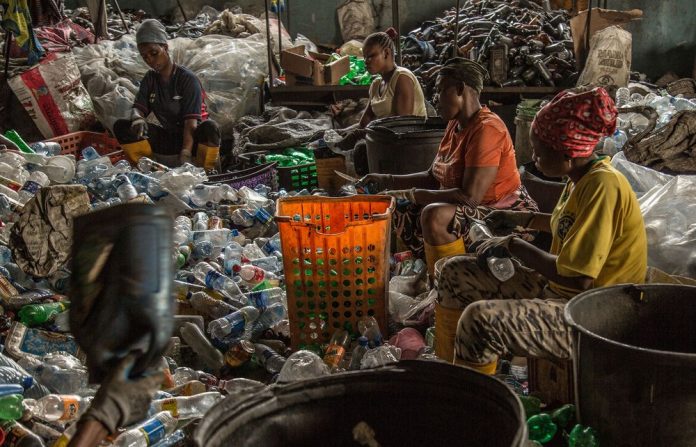 Trying to jump-start a recycling industry in a nation that discards bottles.

(Bloomberg) With 21 million residents whose growing needs have far outpaced the supply of basic services such as electricity, water, and roads, Lagos, Africa’s most populous city, has plenty of unique challenges. But there’s one it shares with megacities around the world: a worsening plastic waste problem. The amount of plastic bottles used in Nigeria has doubled in just the past three years, to an estimated 150,000 metric tons annually, with half of them consumed in Lagos, according to the Food and Beverage Recycling Alliance (FBRA), a trade group. Four-fifths of the containers are never reused or recycled, and during even a modest rain, the city’s streets can flood because litter—much of it plastic trash—blocks drainage lines.

That’s why informal collectors such as Mary Alex could be key to the city’s sustainability future. The gregarious 44-year-old with a gap-toothed smile owns a food and drink kiosk in the historic center of Lagos known as the Brazilian Quarters. Her proximity to the area, where an exceptionally large number of plastic bottles are consumed because of the population density, many businesses, and frequent street parties, has given Alex an unlikely but lucrative side gig collecting PET (polyethylene terephthalate) bottles to be recycled.
relates to Nigeria Enlists Big Beverage Companies to Fight Plastic Waste
A woman peels the labels from plastic bottles in a sorting shed in Lagos.
Photographer: Yagazie Emezi for Bloomberg Businessweek

In the four months that ended in August, Alex, better known as Mama Daniel, made 215,000 naira—about $600, or twice what the lowest-paid Nigerian government worker would have earned in the same period—retrieving plastic trash. She’s collected about 14.3 tons of it, a performance so good that her income from bottle collection now dwarfs that from her kiosk. “I attend parties, and when they’re done I pull out my bag and start to pack bottles without shame,” she says. “Even now I can leave my stall at any time and ask my neighbor to watch over it if there are bottles to pick.”
Plastic by the Ton

Although Lagos generates less plastic waste per ton of trash than some other major cities, poor waste infrastructure means most of it ends up in dumps and waterways.

Notwithstanding Alex’s remarkable prowess, Lagos officials know the area will require a more formal recycling infrastructure. So regulators, sustainability groups, and representatives of beverage makers, including the local units and distributors of Coca-Cola, Nestlé, and PepsiCo—the world’s top three producers of plastic waste according to the group Break Free From Plastics—met in Lagos in October to hash out a standard allowing drinks companies to package products in recycled PET, or rPET. Boosting demand for rPET, which is more expensive than virgin plastic, would encourage investment in recycling operations. “All this points to show that this is a stakeholder and market-driven standard,” says Chinyere Egwuonu, director of standards development at the Standards Organisation of Nigeria.

The concept of formal recycling isn’t widespread in Lagos. Until now the government hasn’t moved to allow drinks to be packaged in recycled material because of health concerns. Even bottles that don’t end up burned or blocking sewer grates—particularly bad environmental outcomes—are thrown in unsorted trash and eventually make their way to one of two landfills to be buried in a gooey mish-mash of solid waste. Thousands of scavengers live and work on the landfills, hunting for specific materials including PET, which only a handful of manufacturers there are willing to buy.
relates to Nigeria Enlists Big Beverage Companies to Fight Plastic Waste
Collected materials are sorted into plastic bottles, plastic bags, cans, and bottle caps.
Photographer: Yagazie Emezi for Bloomberg Businessweek

While Nigeria consumed less than 1% of all PET bottles in 2018 globally, less than 10% of that waste gets collected and recycled, making it an environmental nuisance worldwide. In a study published in Science magazine by a team of researchers led by Jenna Jambeck of the University of Georgia, Nigeria was the ninth-largest source of ocean plastics—based on 2010 data, when the country consumed far less than it does now. The study found that 83% of Nigeria’s PET waste is unmanaged. Consumption is expected to hit 300,000 metric tons by 2021, according to a report by FBRA, an organization of the country’s top beverage companies.

Globally more than 200 businesses, representing about 20% of all packaging used worldwide, have made commitments to reduce plastic waste, according to the Ellen MacArthur Foundation. Unilever NV on Oct. 7 doubled down on an earlier commitment by announcing it would halve its use of virgin plastic by 2025 by various means, including using more recycled plastic. Coca-Cola Co. was among the first big beverage sellers to share its goals publicly in January 2018, when it announced that its bottles will contain an average of 50% recycled content by 2030.
relates to Nigeria Enlists Big Beverage Companies to Fight Plastic Waste
A single crushed unit can be made up of four bags of plastic bottles, which are then taken to another company for full recycling.
Photographer: Yagazie Emezi for Bloomberg Businessweek

Local companies considering investing the $12 million to $20 million needed to get rPET plants off the ground in Lagos are asking for guarantees that the top beverage makers will buy materials from them. “No guarantees have yet been signed, but individual companies have global commitments for recycling,” says Sade Morgan, director of corporate affairs at the Nigerian unit of brewer Heineken NV and FBRA’s chairman. “To that end, there is certainly a commitment by their local subsidiaries toward using rPET once locally available.” Coca-Cola is committed to using rPET in line with its global goal and is in talks with an investor, said Clem Ugorji, public affairs director for its West Africa unit.

Companies that are interested, but uncertain, about investing in recycling plants in Nigeria include a unit of Mohinani Group, one of the country’s biggest producers of virgin plastic bottles, and Alkem, a sister company of Johannesburg-based Extrupet SA, sub-Saharan Africa’s largest recycler of PET bottles.
relates to Nigeria Enlists Big Beverage Companies to Fight Plastic Waste
A man balances a bag of recyclables on his head as he carries it into the hub to be sorted.
Photographer: Yagazie Emezi for Bloomberg Businessweek

But with no local regulation mandating rPET content, beverage makers could choose to shun it. “Virgin plastic is still cheaper than recycled plastic,” says Pieterjan Van Uytvanck, a Singapore-based principal analyst at Wood Mackenzie who expects rPET to be more expensive until at least 2025. Yet regulation and company commitments could still spur bottle-to-bottle recycling plants, he says.

Global pressure is growing. More than 30 African nations have bans or restrictions on the use of plastic bags. And in Europe, where a European Union directive mandates that PET bottles must have 25% recycled content by 2025, beverage makers are effectively forced to buy from rPET producers, and some may eventually buy some of Lagos’s waste.
relates to Nigeria Enlists Big Beverage Companies to Fight Plastic Waste
Alhaja Mojisola Adewale has been a subscriber to Wecyclers for four years. She first heard about it on the radio and was attracted to the benefits, which included a cash payment every quarter or an item valuing the payment. She has three individuals working under her who collect bags of items for recycling every week.
Photographer: Yagazie Emezi for Bloomberg Businessweek

But even if a market for recycled bottles is guaranteed in Nigeria, collection remains a challenge. Wecyclers, a business founded by Bilikiss Adebiyi-Abiola and run by her brother, Olawale Adebiyi, is a pioneer in door-to-door waste collection in Lagos. It’s the company that recruited Alex, who’s recruited others by sharing the story of how much money she makes. Others in Lagos are trying to change local behavior around the disposal of bottles. The Africa Cleanup Initiative allows parents to pay school fees with used bottles they’ve collected.

While the 15 naira that Wecyclers pays per kilo of PET bottles has been enough to motivate Alex, Adebiyi says he’s keen to see more buyers for them, which would increase the price and boost earnings for collectors and dumpsite scavengers. “It’s the chicken or the egg—which ones comes first?” he says. “You have to create the demands for the collection volumes to show up. If investors wait for the volume to increase, where is it going to go?” he asks. “You can’t invest in collection without a major driver for the offtake.”