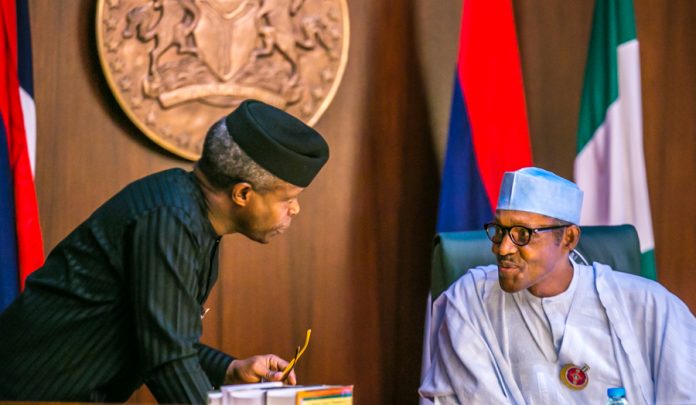 President chose not to hand power to deputy while abroad

The relationship between Nigerian President Muhammadu Buhari and Vice President Yemi Osinbajo is in the spotlight after the head of state embarked on a private overseas trip without handing over temporary authority to his deputy.

While Buhari, 76, transferred power to Osinbajo, 62, during his first term when he traveled abroad for medical reasons, it’s the second time he’s opted not to since being re-elected in February. His chief-of-staff, Abba Kyari, this week had to fly to London so that Buhari could sign long-awaited oil legislation approved by parliament.

Speculation that Buhari is marginalizing Osinbajo was partly fueled by the president’s decision last month to appoint a new economic advisory council that reports directly to him, replacing a committee headed by the vice president. Nigerian newspapers reported that Buhari, who is on a 15-day private visit to the U.K., this week approved the dismissal of dozens of Osinbajo’s aides.

The treatment of Osinbajo since the election “has sent a strong signal to the ruling party and national power brokers that Buhari has no plans to anoint, or go out of his way to position, his VP as his preferred successor,” said Matthew Page, an associate fellow at London-based Chatham House. “It also sends a signal that Buhari prefers to maintain tight control over government decision-making.”

Even before the election, Buhari had begun undoing what could pass for Osinbajo’s legacy by reversing key decisions the latter made when he was acting president. These include removing former Chief Justice Walter Onnoghen, whose appointment was confirmed by Osinbajo while Buhari was abroad, and firing Mathew Seiyefa, the vice president’s choice for head of the secret police to replace a Buhari appointee.

Although the next presidential election isn’t due until 2023, Buhari can’t stand again and attention is already turning to the question of who’ll be the ruling All Progressives Congress’s candidate. A former law professor from southwest Nigeria, Osinbajo won praise for his decisive handling of economic matters, especially during the president’s lengthy health-related absences during his first term.

Under an informal arrangement, the APC is expected to select a candidate from the mainly Christian south to replace Buhari, who comes from the predominantly Muslim north.

Opinions differ over the legality of Buhari’s decision not to transfer power to Osinbajo while he’s in the U.K. for undisclosed private reasons. The president’s supporters say he’s under no obligation to hand over responsibilities if his absence is shorter than 21 days.