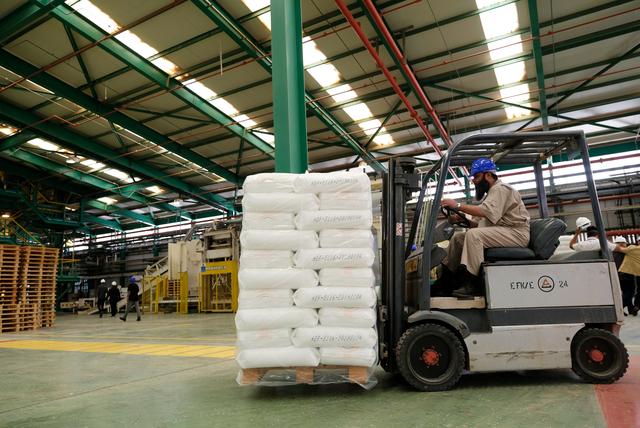 RAS LANUF, Libya (Reuters) – The reopening of a plastics factory in the Libyan oil port of Ras Lanuf has provided a rare boost to an economy ravaged by war and political divisions.

Libya is almost entirely dependent on oil revenues, and the National Oil Corporation (NOC) has struggled to keep crude production stable. Output recovered to about 1.3 million barrels per day (bpd) as of last month, but the picture beyond oil and gas is bleak.

As security deteriorated during the NATO-backed uprising against Muammar Gaddafi in 2011, foreign companies left the country, abandoning hundreds of unfinished or stalled projects.

The polythene factory in Ras Lanuf is operated by Ras Lanuf Oil and Gas Processing Company (RASCO), an NOC subsidiary, and was shut down for more than eight years because of poor security. It reopened last month with an initial production capacity of 80,000 tonnes a year, set to increase to 160,000 tonnes. [nL5N26U62F]

Ras Lanuf is in Libya’s oil crescent, an arc of land stretching south from the Mediterranean coast where oil fields and ports are concentrated. Since 2016 it has been controlled by forces loyal to Khalifa Haftar, an eastern-based commander whose Libyan National Army (LNA) is currently waging a stalled offensive to take control of the capital, Tripoli. [nL8N27E00G]

Ras Lanuf port was blockaded for years and the surrounding area has been repeatedly caught up in fighting between rival Libyan factions and attacks by Islamic State militants that destroyed some of its oil storage tanks.

In June, troops entered the port and commandeered a building and meals for oil workers. [nL8N23K4MG]

A 200,000 barrels per day refinery has been shut due to an arbitration dispute, and a restart expected in last year postponed.

On a recent day, however, uniformed workers could be seen back at their posts in the plastic factory as machines rumbled in the background.

There were unsuccessful attempts to reopen the plastics plant in 2016-17, said RASCO manager Shabaan Bsaibso. Preparations took more than a year and was done by Libyan engineers, since “most of the companies we deal with have not come to Libya”, said plant manager Hamid al-Habouni.

Haftar’s offensive has cast new doubt on Libya’s unity – he controls most oil fields and facilities, but revenues are still channeled through the NOC and central bank in Tripoli, home to an internationally recognised government that Haftar opposes.

In a phone call to workers last month, NOC Chairman Mustafa Sanalla, a former RASCO employee, said the plant’s reopening was a “wonderful” achievement, given the “very difficult circumstances that the corporation and the oil sector in general have experienced”.

“We count a lot on Ras Lanuf, we count on its return for the stability of national economy,” Sanalla said.

Volkswagen to start Rwanda car assembly in May