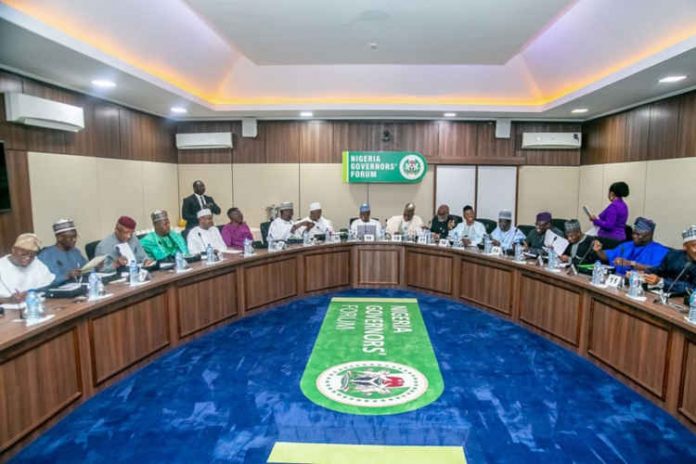 Governors of the 36 states of the federation are now meeting in Abuja to review deductions over N614 billion being made from states accounts following bailout funds given to them by the federal government.

Basically, the governors are asking that some of the deductions be made from the money the federal government is owing them for projects executed on their behalf.

Also, the governors, it was gathered, are seeking for an extension of time in the planned deductions by the Central Bank of Nigeria

Sources gathered that the governors are calling for a committee be set up between them and the Central Bank of Nigeria for a proper reconciliation of the dedications to be made.

The states have recently commenced the repayment of the money they collected as demanded by the federal government.

But they are arguing that the deductions are too much and seeking extension of the period of repayment at a less stringent rate.

Other items for deliberations at the meeting include the following:
-Update on Bill and Melinda Gates Foundation PHC Meeting in Seattle, Nov. 12-13, 2019 and other side meetings; Proposal for recovery of funds due to state governments (Withholding Tax (WHT); Collection of ground rent. NTEL, MTEL etc.), and briefing by NEC Ad-hoc Committee on Excess Crude and other Special Accounts of the Federation,

The meeting under the aegis of the Nigeria Governors Forum (NGF) is ongoing.