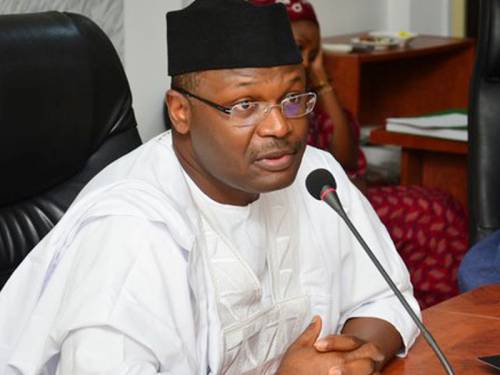 The Chairman of the Independent National Electoral Commission, (INEC), Professor Mahmood Yakubu had declared N1billion would not be enough for it to conduct Edo and Ondo governorship elections next year.

Yakubu spoke while defending the agency’s 2020 budget estimates before the National Assembly’s Joint Committee on INEC in Abuja.

N40billion has been voted for INEC in the 2020 Budget as statutory transfer in the fiscal document presented by President Muhammadu Buhari being considered by the committees of the National Assembly.

The INEC chairman told the Committee that the Edo and Ondo elections were scheduled to be conducted next year.

He said that other supplementary elections may arise.

He said the Commission has saved the N300million by combining Kogi West Senatorial bye-election with the Governorship poll.

“As a result of that position we have taken, we have saved over N300 million that we would have spent if the election were to hold as a stand-alone.
Read Also: INEC seeks review of SIECs’ laws, financial independence

“Now, it will cost less than N10 million because we have combined that election.

“Also in Bayelsa state, we have a supplementary election in Brass local government area.

“We would have concluded way back in March that it begin a subject of protracted litigation over six polling units.

“We are combining it with the governorship election as well. It is going to cost next to nothing,” Yakubu said.

He said apart from increasing the allowance of his workers, he was determined to increase their wages in order to motivate them to resist inducements from unscrupulous politicians.

He told the Committee that about 205 staff of the Commission who are being investigated by the Economic and Financial Crimes Commission following their roles in the 2015 general elections have been placed on half salary.

Yakubu said: “On electoral offences, we don’t have the capacity to investigate; we can only collaborate with Police.

“Only recently, we received 16 case files from the Police but we can’t prosecute. There is the pending Electoral Offences Act to facilitate the Electoral Offences Tribunal, let the bill be passed so that all violators, including our staff can be persecuted.”

Yakubu also told the panel how intense pressure led the commission to vire funds internally to meet urgent demands while responding to to question on extra budgetary spending on its overhead and group insurance items in the 2019 budget.

The question was raised by Honourable Babangida Ibrahim representing Malumfashi/Kafur federal constituency of Katsina state who wanted the commission to make public other sources of revenue to warrant such expenditure above approved limits.

The matter divided lawmakers who disagreed over the propriety of the commission chairman to make extra-budgetary spending.

Senator Bala Ibn Na ‘Allah while providing legal insight on the matter told his colleagues that the framers of the constitution intended for a flexibility of the Commission.

According to him, “it is the intentment of the framers of our constitution to put INEC on first line charge to give it that independence in anticipation of the various requirements of the law than can become interwoven and sometimes become impossible to conduct.

“The independence plus the one-line charge is to offer the flexibility for constitutional and legal requirement as and may become mandatorily imposed on the commission. It is important to understand this.”

Agbedi asked the chairman of the Commission to provide the law that empowered it to engage in extra-budgetary spending.

However, Yakubu urged members of the Committee to take note of challenges that often confront the agency in the discharge of its duties.

Yakubu said: “There are some activities we needed to undertake constitutionally and they are time-bound. “At that time, we received no money for the 2019 general elections. and we operate a one line budget. Recall that, if you look at the appropriation act of 2018, the only thing to you see there N45.5billion and we have to prioritize and re-prioritize within the envelope, we did not go outside the envelope.

“It was just a very difficult thing for us, I understand the point made by Honourable Babangida, honestly it has been recurring, the argument here is that we moved funds from one head to another and did we now apply for virement?

“That is what I think it is leading to. It was almost impossible for us to conduct the 2019 general elections without looking at the budget and operating within the envelop allotted to us.

“You will not see this kind of thing happening in 2019, in 2020 it is not there, it was just a sheer pressure to accommodate these activities, now, biometrics and the pre-election activities, I thank God for the framers of our constitution is that we are on the one-line charge, we did not operate outside the envelope.

“Our assumption is that there is room for some flexibility in that respect that is why when the envelope is given and the budget is appropriated, all you see is a one liner. I completely understand the point that you are making, but I hope you understand the tremendous pressure we were under.

“If we do not conduct the elections within the time stipulated, somebody will go to court and it increases the pressure on the resources of the commission and we have to get lawyers to defend the commission, I guess the one-line budget gives the flexibility. In the overall we have operated within the envelope

Hon. Ibrahim had in his contribution noted that there are discrepancies in the budget.

He said: “If you look at the presentation on the budget performance, you will see that there are abnormalities, look at the front page group life insurance, the approved budget is N500m your expenditure is N628million, there is a N128 extra-budgetary approval.

“If you look at overhead cost, the approved budget is N41.7 billion, if you look at the actual expenditure, it is N43.16 there are a lot of similar allocations where the expenditure are more than the approval of the budget.

He had requested Yakubu to explain if the extra fund was from other sources.