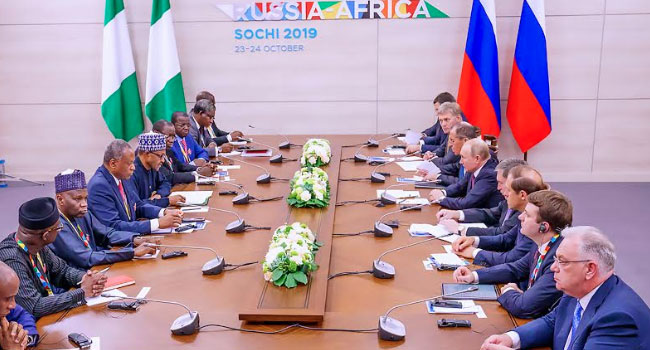 President Muhammadu Buhari Thursday in Sochi, told Russia not to limit its current relationship with Africa to only trade and business but to rather maximise it as a platform for proffering solution to other malignant issues plaguing Africa.

This is coming as the Nigerian National Petroleum Corporation (NNPC) has signed a Memorandum of Understanding (MoU) with Russian oil company Lukoil for potential cooperation in oil production, trading and refining, the Russian oil company said yesterday.

Group Managing Director of NNPC, Mele Kyari, signed the memorandum during a visit to the Russian city of Sochi during a Russia-Africa Summit.

In his speech obtained by THISDAY via email, Buhari told the summit attended by over 40 African leaders, that even though the continent of Africa was rich in both human and natural resources, it is relatively backward in the areas of capital and technology.

He emphasised that infrastructure deficit, terrorism, human trafficking, among others, are major challenges confronting the continent.

Buhari also described Africa’s diversity as a challenge which has slowed down progress on the continent adding however, that Africa’s huge population of 1.2 billion offers the platform to foster inclusive growth.

“I want to emphasise that this mutually beneficial relationship must go beyond trade and business. Our re-energised partnership must also address challenges such as counter-terrorism, poverty eradication, human and drug trafficking, illicit financial flows, climate change and migration to mention some of the many contemporary challenges facing our peoples.

“Our continent is rich in human and natural resources but is lagging behind in capital and technology. This is why we see increased conflict, migration and instability that is also impacting many nations outside Africa.

“On our part, we in Africa have continued to view Regional Integration as a key development priority. Our integration is one that seeks to address our infrastructure deficit, conflicts and terrorism, climate change, human trafficking and of vitality, trade.

“Our integration process also takes into account our diversity as a continent and our unique challenges at the national and sub-national levels. This is why progress has been slow but steady.

“With a population of over 1.2 billion people, for us in Africa, getting our socio-economic integration right presents enormous opportunities as we stand to promote robust, equitable and inclusive growth that will minimize conflict and enhance economic development,” he said.

The president proceeded to inform the summit about the nature of Nigeria, describing it as not only the largest economy in Africa but also the most populous black country whose population has been projected to attain 400 million in the year 2050.

Also telling the summit that the country depends mainly on oil as its main stay, Buhari said the level of dependence on oil was so huge that the country’s gross domestic product does not derive from private sector productivity.

He said it is against this background, that the current federal government had placed premium on diversifying the economy from oil reliance to agriculture, mining and information communication technology (ICT).

Buhari, who also said the country had been investing in agriculture in pursuit of this diversification, added that the country would like the current Russian-African relations to be premised on the Asian country’s preparedness to enhance Nigeria’s diversification agenda.

“Our economy is heavily dependent for its foreign exchange on oil. With the result that our high Gross Domestic Product (GDP) is not as a result of domestic sector productivity.

“In the circumstances, although we still remain an oil dependent nation, our government in the last four years has focused on diversifying our economy by supporting key job creating sectors such as agriculture, mining and ICT.

“To achieve this, we invested aggressively in infrastructure development and introduced policies and programs that enhance our ease of doing business, reduce corruption in the public sector and enforce the rule of law.

“It is this inclusive economic diversification agenda that we want to forge a new Nigeria-Russia cooperation. Already, we are seeing progress in areas of power generation, solid minerals development and rail transportation and I hope this will be expanded to Agriculture, Manufacturing and other means of Transportation,” he said.

when both countries established diplomatic relations as far back as 1960.

According to him, that earlier relationship covered notable areas such as education, healthcare, solid minerals development and military assistance especially during Nigeria’s civil war.

However, he said Nigeria’s recent partnership with Russia had gone beyond the issues covered during the first relations to now include oil and gas, military and technical assistance in support of the fight against Boko Haram insurgency. He thanked Putin for his support for Nigeria’s fight against terrorism so far.

He therefore concluded his speech with the “hope that through this forum, Russia and Africa will revitalize their time-tested relationship by exploring new opportunities for the collective benefit of our peoples.

Russian Energy Ministry said late Wednesday that the country was looking to strengthen ties with Nigeria with a focus on reforming Nigeria’s downstream and gas sector.

The country’s Energy Minister, Alexander Novak said the two countries, which already collaborate through the OPEC/non-OPEC production accord and the Gas Exporting Countries Forum (GECF), are looking to “widen and deepen” their energy cooperation.

“I am convinced that the experience, capabilities and modern technologies of Russian companies can be used to further develop the country’s (Nigeria’s) oil and gas sector,” Novak added.

The two countries also put out a joint statement during the Russia-Africa summit in Sochi saying there would be an agreement on a joint venture between the NNPC and Russia’s Lukoil focused on the refining sector in the country.

Gazprom and NNPC had entered into a joint venture called Nigaz to invest in Nigeria’s oil and gas infrastructure, but not much come out of it.

Novak added that there is great potential for development both in the oil sector and in the sale of LNG, oil and petroleum products, as well as interest in cooperation on exploration, according to the statement.