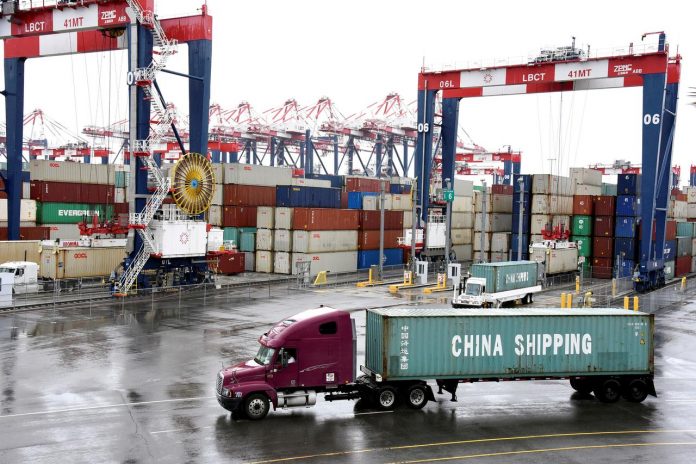 The Institute for Supply Management’s purchasing managers index fell to 49.1 in August, weaker than all forecasts in a Bloomberg survey of economists, data released Tuesday showed. Figures below 50 indicate the manufacturing economy is generally shrinking. The group’s gauge of new orders dropped to a more than seven-year low, while the production index hit the lowest since late 2015.
Manufacturing gauge contracts for the first time since 2016 as new orders tumble

The data add to concern a broader U.S. recession is coming and may complicate the re-election chances of President Donald Trump, whose pledges to revive manufacturing have been a signature issue. At the same time, Trump’s escalating tariffs on imports from China have been a major reason behind factory weakness that threatens to spread to consumer spending, which accounts for about two-thirds of the world’s largest economy.

In the U.S. stock market, the ISM numbers torpedoed a morning rebound and left the S&P 500 poised for its worst loss in seven sessions, down as much as 1.2% to erase almost half of last week’s rally. The 10-year Treasury yield and the dollar fell.

Traders of fed funds futures boosted the amount of easing they expect from the U.S. central bank this year, following a July 31 quarter-point cut that was the first since 2008. For the next Fed decision on Sept. 18, investors increased bets on a half-point reduction but continued to lean toward a quarter-point cut.

“This piece of data is part of the puzzle that helps to push us into recession,” said Quincy Krosby, chief market strategist at Prudential Financial Inc. “The ramifications of the trade war show up in the euro zone, in Asia and now in the U.S. If the deterioration in the U.S. continues, it’s going to feed into the overall labor market.”

“To be sure, economic anxiety related to tariffs and increasing trade tensions is extracting a significant toll on business confidence. However, there was limited direct evidence of tariffs creating upward price pressures or materials shortages in the details of the report. As such, the second-order impacts from the tariffs (i.e. confidence effects and currency appreciation) appear to be having the more substantial impact.”
— Carl Riccadonna, chief U.S. economist

Although manufacturing only makes up about 11% of the U.S. economy, there are concerns that entrenched weakness — and any layoffs that may result — could filter through to the rest of the economy and endanger the record-long expansion.

Transportation equipment was one of seven industries in the ISM report to report shrinking business activity last month. Automakers, which report their August sales on Wednesday, account for some of the slowdown. General Motors Co. has ceased production this year at a car plant in Ohio and transmission factory in Michigan, two of the four U.S. sites that it has said aren’t being allocated future product. Other automakers are reducing production shifts, including Nissan Motor Co., Fiat Chrysler Automobiles NV and Honda Motor Co.

Weakness in the automotive and electronics markets is also impacting 3M Co.’s bottom line. Sales and profit at the diversified manufacturer fell in the second quarter even as earnings topped expectations. At Caterpillar Inc., a slowdown in crude extraction from the Permian Basin, the largest U.S. oil patch, is reducing demand for machinery. What’s more, the equipment maker’s worldwide machine sales in June and July were up 4%, the slowest in two years.

Manufacturing is technically already in a recession in the U.S. with a Fed measure of output declining in two consecutive quarters. The malaise is consistent with developments in the sector around the world. By one measure, global factory activity has contracted for four straight months.
Global economy suffers from consequences of U.S.-China trade war

The ISM’s measure of new orders, which are tracked by some as a leading indicator of a downturn, declined to 47.2. It was the first time since December 2015 that the gauge fell below 50. ISM’s production gauge also sank below that mark, to 49.5 in August from 50.8.

The slump in demand and output spilled over into the labor market as the ISM’s gauge of factory employment fell to 47.4, the lowest level since March 2016. That suggests this Friday’s employment report will show weakness in August manufacturing payrolls, which were surprisingly solid the previous two months.

“It confirms that the weakness that we’ve been seeing for a number of months now on the global front and on the tariff front is really washing up to the U.S. shores,” said Gregory Daco, chief U.S. economist at Oxford Economics. “What’s important here is that it’s not just the current conditions that have deteriorated quite sharply but also the forward-looking components.”

A measure of export orders, a proxy of overseas demand, sank to 43.3, the lowest reading since April 2009 during the depths of the last recession.
Largest share of U.S. factories in a decade report falling export orders

A separate factory PMI from IHS Markit came in at 50.3 on Tuesday, showing manufacturing was barely expanding. Economists and investors tend to more closely follow the ISM report, which dates to 1931.

The “shock effect” of the latest ISM report “adds to recession fears, and the components were also pretty weak,” said Jim Paulsen, chief investment strategist at the Leuthold Group, in an interview. “This does confirm that we’re not bottoming out yet in manufacturing in this country, and that’s significant.”