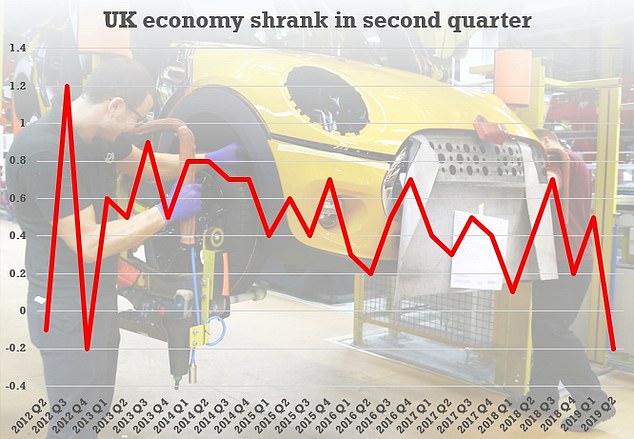 Manufacturing was the biggest contributor to the overall contraction, slipping 2.3% quarter-on-quarter.
On a month-to-month measure, June GDP came in at zero, versus expectations of a 0.1% rise.

The British economy has shrunk for the first time since late 2012, after official data Friday showed second-quarter gross domestic product (GDP) contracted by 0.2%.

A consensus of analyst forecasts had predicted the economy would flatline during the period.

In reaction, the pound dipped below $1.21 versus the dollar but soon recovered ground. Against the euro, the pound also fell. The FTSE 100, which often reacts inversely to the fortunes of the pound, rose after the results but was still in negative territory on Friday morning.

On a month-to-month measure, June GDP came in at exactly zero, versus expectations of a 0.1% rise.

A slowdown in U.K. output was expected after a build up of inventories during the first quarter in anticipation of a March Brexit date. Britain’s exit from the EU was delayed and is now scheduled for October 31.

Should the U.K. suffer a further contraction in the three months to the end of September, then the U.K. economy will officially be in recession.

Third-quarter economic growth is expected to be a tepid 1.6%, but...