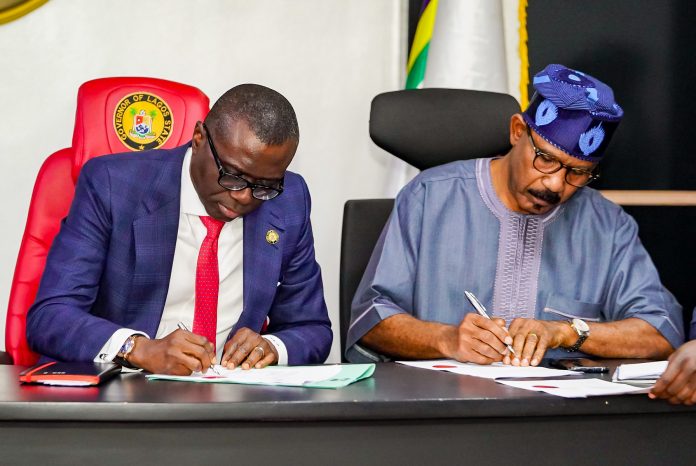 The lingering dispute between Lagos State and the Federal Government over the control of waterways has come to a rest, with the signing of an agreement for cooperation by both parties on Monday.

Governor Babajide Sanwo-Olu received the officials of the National Inland Waterways Authority (NIWA) led by the Managing Director, Sen. Olorunnimbe Mamora, for the ratification of the treaty, which will guarantee a better working relationship between NIWA and Lagos State Waterways Authority (LASWA).

The row over the control of waterways surrounding Lagos started more than 10 years ago between NIWA and LASWA, with both parties locking horns in a protracted legal battle. With the new agreement, both parties will now have a joint responsibility to ensure safety, harmonise tariffs and monitor regulations on the waterways.

After signing the agreement, Gov. Sanwo-Olu said the development implied the unlocking of investment in water transportation, which is one of the cardinal projects of his administration.

The Governor described the treaty as “right choice” to end the long-drawn-out rift, pointing out that the ceremony was a testimony to the benefits the citizens could gain when agencies of government agree to collaborate.

He said: “I congratulate these two agencies of government that have found it right to collaborate. This is one of the progresses we have made to promote ease of doing business and as regulators, we must always find a way to close our differences in order to convince investors and private sector.

“Transportation is one of the cardinal objectives of this administration. We have said we have plans to introduce a comprehensive intermodal transportation system, which will cover rail, roads and waterways. A critical component of this objective is what this agreement just enabled for us. It means we are prepared for investors and partners who have shown interest in partnership on waterway transportation to move our people from one part of the state to another.

“We are assuring investors that issues around regulations between these agencies of the state and Federal governments have eased out. Investors don’t have anything to fear again. The safety of people that will be using the ferry services for tourism and leisure is paramount. This is one of the things the agreement has addressed. We can monitor and ensure regulations are followed, since both agencies are now in agreement.”

Sanwo-Olu said the effort by his government to harness the State’s potential in water tourism had received a boost with the signing of the agreement, saying the treaty had removed impediments preventing the state from tapping investment in water tourism.

Mamora said the agreement was signed in good faith and in the best interest of the people, noting that the previous administration in the State prepared the groundwork for collaboration between NIWA and LASWA.

The NIWA boss said Sanwo-Olu’s anxiousness to see the end of the dispute led to the agreement, which would result in increased surveillance on waterways, harmony in tariffs and regulations.

“We don’t need the court to intervene in ensuring safety on waterways and protecting the rights of our people and avoiding multiple taxation which discourages investors. These are the areas we are partnering on. This agreement shows that we care for our people, particularly the users of the waterways.

“This agreement means better life for our people. What we have signed today will promote better working relationship and collaboration for the good of our people. Our desire is to see the possibility of settling out of court, because this disagreement has been on for over 10 years. The most important thing is that, once we have this understanding, we won’t have issues. Investors, too, would be free to come in, since they know there is no friction and restrictions again.”

Also, the LASWA General Manager, Mr Oluwadamilola Emmanuel, expressed optimism that the collaboration would promote safety standards on waterways, adding that it would open up the sector for sustainable development.