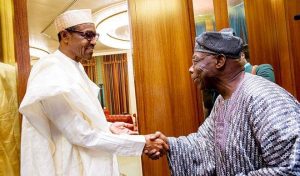 While some praised the former President for speaking up, others pick holes in his statement.

Obasanjo through his media aide, Kehinde Akinyemi, had on Monday released a letter that forewarned Muhammadu Buhari of the imminent crises that could engulf the country if some issues were not addressed.

According to the former President, the country is on the edge of a precipice and all hands must be on deck to prevent it from collapsing.

Obasanjo called for urgent actions to tackle Nigeria’s challenges and offered pieces of advice that could help combat the challenges.

Many Nigerians have taken to social media to react to the letter.

Olumuyiwa Ariyo wrote on Facebook, “Obasanjo is obviously not writing this letter for his own sake but for us. He is old and has achieved what anyone may be dreaming of. I pray the government listens.”

On Twitter, @WickedResponses said, “Just imagine that Buhari listen to some of these good criticisms and fix Nigeria. Who will take the accolades? Is it Buhari or the critics?”

Also reacting to the letter in a Facebook post, Bassey Offor said, “I read through OBJ’s letter to Buhari. Some people are abusing him and calling him names. However, one would say that Obasanjo, though not perfect, is one of the greatest and most intelligent persons to have ruled Nigeria. Buhari should read this letter and act immediately.

Also commenting on Facebook, Sunday Gideon Gumut wrote, “I must confess the content of the letter encapsulated the present security challenges the country is faced with, and the potentiality of it escalating to a genocide which could lead to a total breakdown of the nation.

“Notwithstanding, I, for one, would love to remind all Nigerians that we can only suggest to make comments and hope God provides Mr President with the right frame of mindset and the right hands on deck to check what’s really going on in this country. Politics aside security(sic) is a menace to all, rich and poor, young and old so no need for sentiments. God bless you all.”

“The very first day Obasanjo started writing letters was the day Buhari asked the question “Where is the power after spending $16b”?

“However, there have not been official responses or rejoinder from spin doctors of President Muhammadu Buhari despite the fact that the social media is awash with comments on the open letter from Obasanjo.”