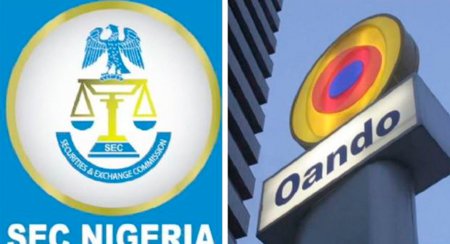 People who are dishonest, or rash, or stupid will inevitably suffer the penalties of dishonesty, or rashness, or stupidity — Herbert Spencer Quite amusingly but with great lessons to learn from, the recent decisions taken by the Securities and Exchange Commission (SEC) on the report of a legally constituted Investigation Panel on the alleged corporate governance abuses in Oando Plc have continued to attract raging controversies with vociferous intensity in the public discourse space over the weeks such that with the twisting of the real issues, the SEC appeared to have erred in law and therefore should be ‘crucified’ for a regulatory blunder. As it were, some analysts and commentators, possibly guided by some extraneous understanding of the real issues, have described the action taken by the capital market regulator on the key players in the Oando Plc’s ‘financial mess’ after close to three years of thoroughly going through the oil marketing company’s financial and other operational records, as totally harsh and uncalled for.

Curiously, some industry experts, who ordinarily should appraise the issues beyond the façade of frivolous and seemingly sponsored write ups in newspapers, magazines and the emerging social media platforms, seem to have been caught in the current wave of emotional and sentimental ‘fever’ that has characterized the debates and are now seeing the issues from what could be likened to an ill-conceived and jaundiced intellectual perspective. Beyond the frivolous commentaries and opinions characterizing the SEC-Oando Plc’s matter in the public discourse space are some fundamental questions requiring dispassionate answers from all those who feel the matter deserves critical interrogation in order to appreciate the enormity of the issues and the implications for investor’s interest in the capital market.

The first is: Was there any abuse of due process in Oando’s financial system before the regulator’s intervention? Secondly, were all the officials involved in the alleged abuses of corporate governance principles in the oil marketing company’s finance given the opportunity to defend themselves on issues raised by both the external auditors and the Investigation Panel? Thirdly, did SEC err in law on the various steps it took to look into the allegations of financial abuses in Oando Plc? Finally, was there any legal basis for the SEC’s actions and in whose interests would the actions be in the long run? For those who care to know, the investigations that culminated in the suspension of the two principal actors in the Oando Plc’s debacle started over two years ago and the management of the SEC, led by the Acting Director General, Ms. Mary Uduk, appeared to have, in furtherance of its commitment to its zero-tolerance for infractions in the nation’s capital market, given more than enough time for the investigators and those accused of any wrongdoing to say what they knew about the ‘facts in issue’, to ensure fairness in the whole process. Even when a few months ago some newspapers, which are reputed for blackmailing journalism, started to insinuate that the SEC had ‘swept the panel’s report under the carpet’, the Mary Uduk-led management never reacted negatively to such journalistic adventurism of the absurd but allowed due process to take its full course on the matter. Now before delving into the second question of whether the ‘dramatis personae’ accused of abuses in the management of the oil marketing company’s finance is answered, there is the need to revisit the issues that necessitated the setting up of an Investigation Panel to look into the financial books of the company. According to the report by Ernst & Young, the company’s auditors for the year ended December 31, 2016, Oando Plc’s financial position was not healthy in real terms. For instance, apart from a huge loss of N33.9 billion in the year as against N56.6 billion in 2015, the company’s current asset exceeded current liabilities by about N14.6 billion (N32.8 billion net current liability in 2015).

The auditors also reported that on the group’s performance, Oando had a comprehensive income of N112.4 billion for the year, against net loss of N37.8 billion in 2015, with its assets in the year under review standing at N263.8 billion as against N260.4 billion in the preceding year. A top shot in the professional services firm, Yemi Odutola, in a statement relating to the company’s findings, maintained that “these conditions, along with other matters, indicate that a material uncertainty exists that may cast significant doubt on the company (and Group’s) ability to continue as a going concern. Our opinion is not modified in respect of this matter.” Apart from the auditor’s report, the Commission also engaged Deloitte & Touche to conduct a forensic audit of the activities of Oando Plc during which Oando Plc’s board members and top management were given the opportunity to make clarifications on issues relating to the auditor’s findings. Following the startling revelations about the company’s worrisome financial situation, the commission communicated its findings to the Group Chief Executive Officer (GCEO) of Oando Plc by a letter dated July 10, 2017. According to the SEC management, the sanctions imposed on the company and its top management officials, namely the Group CEO, Mr. Wale Tinubu, and his deputy, Omamofe Boyo, were informed by their unsatisfactory responses to the issues raised in both auditors’ reports and based on their blatant violations of securities laws. But for the worrisome revelations by the auditors, the SEC would not have had any ‘locus standi’ to initiate any probe of the financial position of the oil marketing company, in the first instance. After all, Oando Plc is not the only downstream operating company listed on the NSE. As a common saying goes, ‘it is only the finger that errs that the king cuts’. From the foregoing, it can be safely assumed that the capital market regulator has not breached provisions of any extant law by taking steps it took by acting on the issues raised in the auditors’ reports on the financial position of a publicly quoted company under its supervisory mandate. That seems to be the answer to the third question raised earlier.

Now, coming to the most legal aspect of the SEC-Oando Plc’s brouhaha, the truth is that the law is on the side of the commission for probing the oil marketing company and its top officials, at least for the purposes of ‘hearing the other side’ or what the principle of fair hearing calls in Latin ‘audiatur et altera pars’. If the commission had suspended the company’s ‘chieftains’ before commencing the investigations, it would have been a regulatory blunder and its actions would have been declared by the courts as ‘ulra vires’ or ‘null and void’ simplicita!

A cursory interpretation of Sections 13(n), 45, 303 of the Investments and Securities Act (ISA) 2007 and Rule 598 of the SEC’s Rules and Regulations empower the commission to protect the integrity of the nation’s bourse against all forms of abuses by investigating and sanctioning persons who violate the provisions of the Act and the Rules and Regulations made pursuant thereto. Also, Section 310(1) of the same Act referred to in the above paragraph and Rule 599(1) of the commission’s Rules and Regulations both empower the Commission to set up the SEC Administrative Proceedings Committee (APC) to hear complaints on alleged violations of securities laws governing the market.

What all these provisions clearly showed in the SEC-Oando Plc’s raging debates is that the commission did what was right from all legal assessment parameters and did not in any way breach the law. Interestingly, as the management has clarified, there was no basis for ‘witch-hunting’ any official of Oando Plc or prying into its financial records as being insinuated by some commentators as all the sides and all the facts seemed to have been carefully studied by the management before its decisions on the erring oil marketing company and its officials were arrived at. Now, what is the way forward and what are the options open to the parties on this lingering saga? It is salutary to note that while the enforcement of the SEC decisions was being carried out, the aggrieved parties had decided to approach the courts for justice against what they perceived as unfair treatment by the SEC. As expected, the latter had promptly responded to the suit now before court, with a view to justifying its actions on legal grounds. To me, this is a healthy development as sooner than later, the court would make its pronouncement on the points of law raised by the Plaintiffs on the regulatory sanctions as well as the arguments of the defendants. It is quite interesting that the findings of the auditors as well as the subsequent decisions taken by SEC on the Oando Plc’s saga are not final and subject to appellate consideration by the courts. In the final analysis, it is certain that justice would be done and the investing public’s interest would be protected.

It is against this backdrop that this writer is of the strong view that further heating the discourse space with rancorous comments by ill-informed analysts on the ‘facts of the case’ may not be in the interest of the parties, including Oando Plc’s investors. What seems to be reasonable, at least in the interim, is for all commentators to wait for the court to make its pronouncement on the matters before it.

It is certain that no matter how long it may appear, justice will be done in the interest of all parties, especially the Nigerian retail investors whose investments are at stake on this pesky matter!