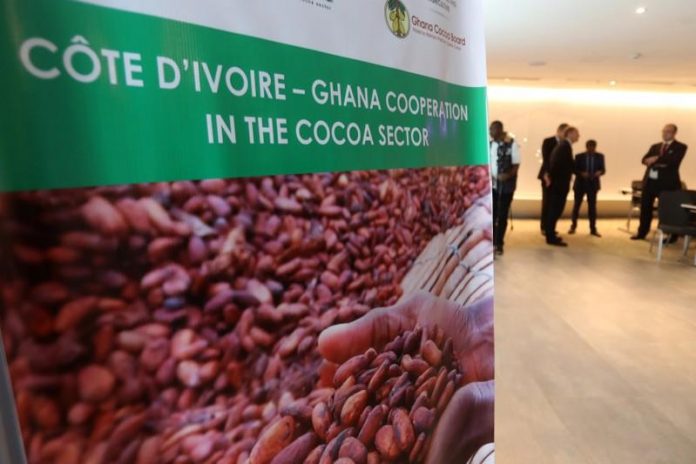 ABIDJAN/JOHANNESBURG (Reuters) – U.S. food maker Mars Inc. supports a decision by Ivory Coast and Ghana to set a floor price for their cocoa exports, a senior executive told Reuters on Wednesday, becoming one of the first major chocolate companies to back the initiative.
A billboard is pictured during a meeting between

The West African neighbours said last month they will fix a minimum price of $2,600 per tonne free-on-board that chocolate companies must pay from the 2020/21 season if they want to access their more than 60% share of global supply. [nL8N23J3JP]

The price is meant to ease pervasive farmer poverty that has become a blight on chocolate’s image and a threat to the sector’s future in West Africa, as young people walk away from a life of backbreaking labour with little reward.

“We believe cocoa farmers should earn sufficient income to maintain a decent standard of living,” John Ament, Global Vice President of Cocoa for Mars, told Reuters. “The reality today is that many are a long way from this.”

Mars makes a number of iconic chocolate treats including M&M’s, Snickers and Twix.

Though farmer advocacy groups have applauded the decision, major players in the chocolate industry have remained largely silent since the decision was announced on June 12.

Privately, some complain they were not consulted on the plan and worry it could push companies to buy their beans elsewhere or over-stimulate production, leading to a global price crash. [nL8N23X5GY]

Officials from Ivory Coast and Ghana were meeting with industry executives in the Ivorian commercial capital, Abidjan, on Wednesday to discuss details of the strategy.

“We support moves by governments to intervene to achieve a higher price that leads to a sustainable increase paid to the farmer and is supported with governance to ensure there is no further expansion of land use to grow cocoa,” Ament said.

Mars said Ivory Coast and Ghana are crucial sources of cocoa for its business. One industry analyst estimated that the company uses around 430,000 tonnes of West African cocoa and cocoa derivatives annually.

The floor price is not the first attempt to combat farmer poverty.

Still, a Fairtrade International survey last year found that just 12% of Ivorian cocoa-farming households earned $2.50 per person per day, a level it calculated to be the living income benchmark.

“Initiatives to boost productivity, improvements in social services and infrastructure, and exploration of alternative incomes are necessary, but they will likely not be enough without an increase in the price farmers receive for their crop,” Ament said.