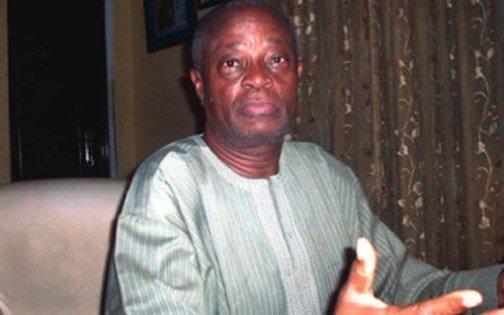 A former Minister of Works, Sen. Adeseye Ogunlewe, on Saturday said he had no regrets dumping the Peoples Democratic Party (PDP) for the All Progressives Congress (APC).

Ogunlewe made the declaration in an interview with the News Agency of Nigeria (NAN) in Lagos.

‘’I have no regrets dumping the PDP. I feel at home in APC, it is a better party with good plans for Nigerians,’’ he said.

NAN reports that Ogunlewe had made his intention known in May to dump PDP over the leadership crisis rocking the party in the state.

The former minister had given the opposition party 30 days ultimatum to resolve the leadership crisis in the party otherwise, he would join the APC.

Ogunlewe said the question of which political party he now belongs to should not arise anymore as he had since dumped the PDP for the APC.

‘’I dumped PDP days after the expiration of the ultimatum as the leadership crisis persisted.

‘’I have no regrets leaving a party without a chairman, and as I speak to you, I feel at home in the APC.

”I have left PDP, and I am now in APC. I gave them 30 days to resolve their leadership crisis and I waited days after the expiration still the crisis persist.

‘’Up till this moment, they don’t have a chairman in Lagos chapter of the party.

”I can’t stay in such a party. I have moved to the next level. I am now in the fold of the progressives where I truly belong,” he said.

The former minister said he had always been what he called a progressive, adding he had at various times been in the defunct Action Group (AG), Alliance for Democracy (AD) and Action Congress (AC).

‘’These were political parties for the progressives and people of like minds,” Ogunlewe said.

The former minister said he became a senator on the platform of AD, adding that he was glad to be re-united with his old colleagues most of whom were now bigwigs in APC.

He said apart from the crisis in the PDP, his decision to join APC was also influenced by President Muhammadu Buhari’s recent posture on governance.

Ogunlewe said Buhari’s implementation of the direct allocation of funds to local governments and the honour done to the late MKO Abiola, the presumed winner of the June 12, 1993 elections were remarkable.

He said Buhari, with his recent steps, had started doing what the progressives had been yearning for, adding that he was pleased to align with him and APC.

“You know what he has done now. He has given financial autonomy to the local governments and that is part of what progressives have been yearning for.

“One is beginning to see the voice of the progressives in Mr President; he is doing gradually what we have been fighting for.

“Look at what he did to late Abiola, these are commendable steps. We want him to do more. Just as he is gradually giving us true federalism, we want him to restructure the country.

“The way Nigeria is structured presently is too heavy. The president should restructure the country, without it, we cannot have the kind of progress we want,” the former said.

Ogunlewe also said he was motivated to join APC because of his believe that the party would zone the presidency to the South West in 2023.

He said if that eventually happens, the National Leader of the party, Mr Bola Tinubu would be a good choice for Nigerians.

Ogunlewe described Tinubu as “a cerebral and visionary politician, who he possesses the right leadership skills to move the country forward.”