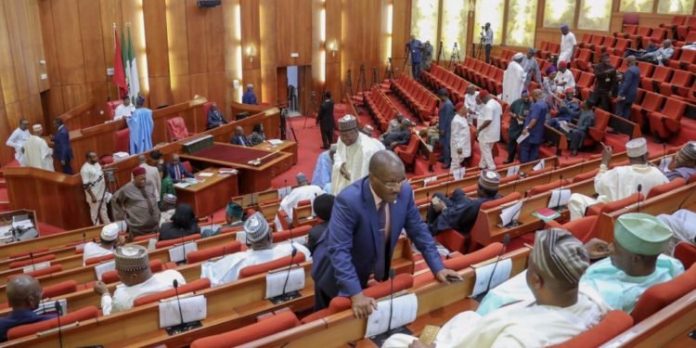 The Senate reconvenes plenary on Tuesday after three weeks break following the inauguration of the Ninth National Assembly.

With the seamless election of presiding officers, the question on the lips of National Assembly watchers is who becomes Senate Leader, Deputy Senate Leader, Chief Whip and Deputy Chief Whip?

This is even as senators’ scheming and jostling for headship of juicy committees have begun in earnest.

Multiple sources informed that lobbying for the key positions of Senate Leader and others “is getting more and more intense by the day” as the Tuesday date for the resumption of plenary draws near.

The Senate President is expected to announce the occupants of the top Senate positions on Tuesday if the trouble shooting efforts of the All Progressives Congress (APC) yields fruit, it was learnt yesterday.

The important positions, which will form part of the leadership of the upper chamber, also referred to as the “Selection Committee” are said to be the duty of the majority party in the Senate to decide who becomes what in line with its zoning arrangements.

The Senate President is the chairman of the Selection Committee which allocates committees to senators.

At the last count, Senators Abdullahi Adamu (Nasarawa West) and Aliyu Sabi Abdullahi (Niger North), both from North Central, are the top contenders for the slot of Senate Leader.

With just three days to resumption of plenary, insiders said yesterday that APC is yet to take a position on who to choose as Senate Leader.

Findings showed that while those rooting for the Niger North Senator to emerge Senate Leader are banking on “the work and the risk he took for the emergence of Lawan as Senate President,” those angling for Adamu are pushing what they describe as the Nasarawa West Senator’s “rich experience on legislative matters.”

It appears that the main battle is the position of Senate Leader as other principal officers’ slots are said to “have been sorted out by the party.”

A North Central APC senator insisted yesterday that the party “must do what is right in its selection process to avoid setting senators against themselves and breeding bad blood in the Senate.”

According to the senator, who is also part of the lobby group of one of the contenders, “what remains sacrosanct is that the Senate Leader’s position has been zoned to the North Central but the race is still open as to who will be announced on Tuesday when we reconvene.”
Unease in PDP over minority whip position

The camp of opposition Peoples Democratic Party (PDP) which many thought had got it right with the selection of Senator Enyinnaya Abaribe (Abia South) as Minority Leader is already boiling.

The National Working Committee (NWC) of the PDP is said to have concluded arrangements to tinker the list of selected principal officers of the minority party in the Senate.

Unconfirmed reports on Tuesday said that the NWC of the PDP is pushing to drop the Edo Central Senator, Clifford Ordia, who was earlier selected as the party’s Deputy Senate Whip.

A South-South governor is said to be behind the move to shove Ordia aside in place of Senator Sahabi Yau from Zamfara State.

Those who emerged with Abaribe at a meeting held in the Abuja home of the National Chairman of PDP, Uche Secondus, included Emmanuel Bwacha, who represents Taraba South Senatorial District, as deputy minority leader.

It was reliably gathered that the attempt to drop Ordia is being fiercely resisted by other PDP South-South senators.

Ordia himself is said to have been livid when the news broke that he might be dropped to make way for a Zamfara Senator.

Some South-South senators are threatening a showdown with the PDP NWC, vowing to resist what they called a plot to impose Yau on them without due consultation.

PDP has 16 senators from the South-South geopolitical zone while APC has two.

Senators from Edo, Cross River, Delta and Akwa Ibom states are insisting that the South-South cannot be without holding a principal position in the upper chamber.

One of the aggrieved South-South senators explained that election was conducted at a meeting held at the Abuja home of PDP National Chairman, Secondus, on June 14.

He added that nominations were also made before winners emerged. According to him, those who emerged were unanimously backed by the various PDP organs.

He claimed that the plot to drop Ordia does not have the backing of the caucus of the party.

He said: “Under the rules of the Senate, it is not the responsibility of the National Working Committee to select principal officials.

“It is the responsibility of the senators themselves to select who leads them. The minority senators have freely elected those they want and nothing will change it.

“The argument that they want to represent every part of the country is false.

“There are eight positions open to the PDP in the two chambers of the National Assembly. Even if you share one to each geopolitical zone, two will still get an extra slot.

“Those we selected are known to us. They are the people we can work with. Some governors causing this division don’t know how the Parliament operates. They want to control everything in the party for their selfish interests.

“Maybe the NWC has not learnt its lessons. The APC tried this imposition in the eighth Senate and they paid for it dearly.

“It is up to the PDP to allow us have our way or allow strangers destroy its fold in the Senate.

“The wish of senators must be respected for sustainable peace in the Senate.”

APC and PDP senators’ caucus meetings are said to have been scheduled to hold ahead of the resumption of plenary on Tuesday.

Although the agenda of the meetings are not known, they may not be unconnected with the need to reconvene a crisis-free Senate on Tuesday.