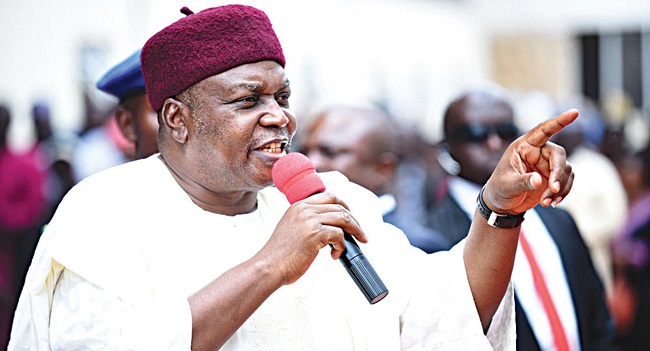 By our correspondent on Taraba

Governor Darius Dickson Ishaku of Taraba state has condemned the renewed attacks on innocent citizens by Fulani herdsmen invade some villages around Jalingo The state capital.

In a press statement made available to media practitioners by the governor, the attacks, according to him “are not only ungodly, unethical and barbaric but counter productive considering the sanctity of human lives and the peace initiate by the governor to accelerate the peace of development of the state. ”

Singed by his Senior Assistant on Media and Publicity, Bala Dan Abu, the government, according to the statement “is particular worried over lack of arrest and prosecution of the herdsmen by security agencies despite their repeated and unabated operations with sophisticated weapons such as AK47 rifles,

The governor who also decried the alleged lopsided arrest of youths in the affected area, called on the security agencies “especially soldiers ” to be “unbiased in the handle and discharge of their duties on crisis areas. ”

Assuring the people of the state of its commitment towards ensuring lasting peace for sustainable growth and development, he directs traditional rulers in the state to always preach peace in their domains and to always report suspicious persons in their midst to government security operatives for necessary action.

Reiterating his administration readiness to continue collaborating with the security agencies in order to achieve a crime free society, he warned perpetrators of the crisis to desist forth with adding that government cannot afford to fold it’s arm and watch bandits waste resources. ”

Ur security operatives to be proactive by dealing decisively with armed bandits which are bent on making lives unbearable for the people across the state, he warned youths in the state “especially those domiciling around crisis prone areas not to take laws into their hands but should strive at operating strictly within the confines of the law. ”
END