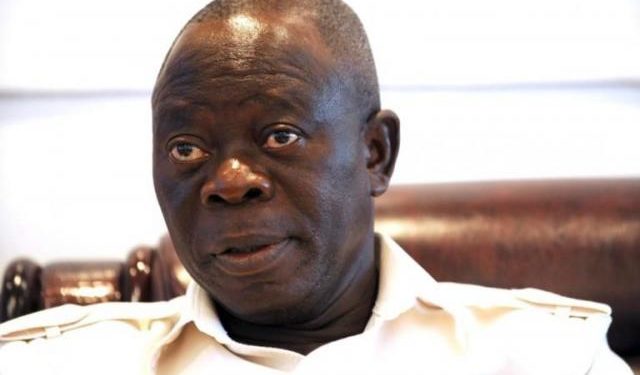 State Chairmen of the All Progressives Congress (APC) has described public disparagement of the party’s national Chairman, Comrade Adams Oshiomhole as unconscionable distraction borne out of complete misconception of the reforms and specifically, the principle of loyalty to the party.

The Communique made available to The Nation was signed by twenty state Chairmen of the party cutting across the country.

The communique reads in party: “That Comrade Adams Aliyu Oshiomhole stepped in the saddle in June last year and hit the ground running by embarking on sweeping reforms that centered on party discipline and supremacy. He galvanized and led the National Working Committee (NWC) with commitment and sharp focus on greater philosophical ideals of rebuilding the party and raising the party another notch.

“In line with his credo of fairness to leadership and membership of the party, the NWC, under his leadership, ensured a level-play field in the primary elections that largely returned the party to the people (general membership).
Read also: Oshiomhole has capacity to reform APC – Aganaba

“He led the NWC with a single purpose of dismantling the culture of impunity and imposition of anointed candidates at the expense of the vast majority of party members by some overbearing state governors.

“Oshiomhole provided leadership that encouraged the APC candidates to go into the 2019 general election with assurance and great hope. Realising the pains and strains that usually accompany reforms and change, we are satisfied with the level of success that our party achieved under the Oshiomhole-inspired reforms.

“We are proud with the leadership provided by the National Chairman in the recent election of Principal Officers of the National Assembly, where he ensured the emergence of Senator Ahmed Lawan and Hon. Femi Gbajabiamila as Senate President and Speaker of the House of Representatives respectively. You said it will happen and you worked hard to achieve it. Kudos Mr. Chairman.

“We believe the best is ahead of our party and that all hands must be on deck to ensure that we incrementally build on the solid foundations of reforms that have brought about discipline, party supremacy and put the party directly in the hands of the people

“Flowing from the above, we consider the public disparagement of our National Chairman, Comrade Adams Oshiomhole by anyone or group as unconscionable distraction borne out of complete misconception of the reforms and specifically, the principle of loyalty to the party.

No other party will rule in Lagos except APC – Akiolu