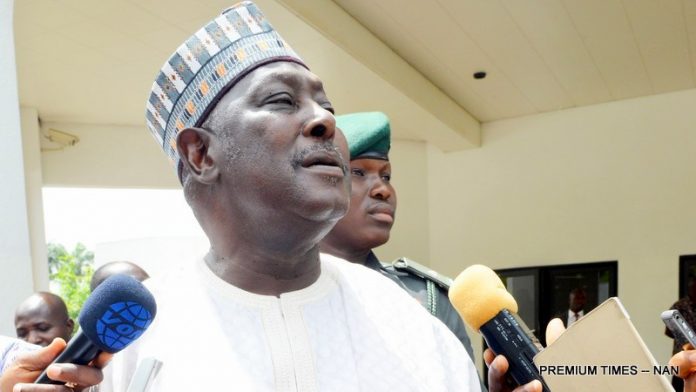 The absence of Akin Olujimi, counsel to the ex-Secretary to the Federal Government, (SGF), Babachir Lawal, has stalled his trial alongside three others.

Mr Lawal, along with his younger brother, Hamidu David Lawal, Suleiman Abubakar, Apeh John Monday and two companies, Rholavision Engineering Ltd and Josmon Technologies Ltd, are being prosecuted by the Economic and Financial Crimes Commission, (EFCC) on an amended 10-count charge, bordering on fraud, diversion of funds and criminal conspiracy to the tune of over N500 million.

They were earlier arraigned before Jude Okeke on February 13, and the prosecution was meant to open its case on March 18.

According to a statement signed by the anti-graft agency spokesperson on Tuesday, it said Temitope Adeyemi, who held brief for Mr Olujimi, asked the court for an adjournment, following his illness and absence.

“The lead counsel in this matter is still indisposed as he had earlier told the court and has asked that I apologise for his absence in court and also ask for an adjournment to enable him to be present in court,” Mr Adeyemi said.

According to the statement, the prosecution counsel, however, told the court that he was informed Mr Olujimi’s illness and therefore will not oppose the application.

The judge noted that there was no document in support of the adjournment application to show that the lead counsel was indisposed, but that he was disposed to giving the “learned silk” the benefit of the doubt.

He adjourned the matter to July 4, 2019, noting that today’s adjournment was the second.