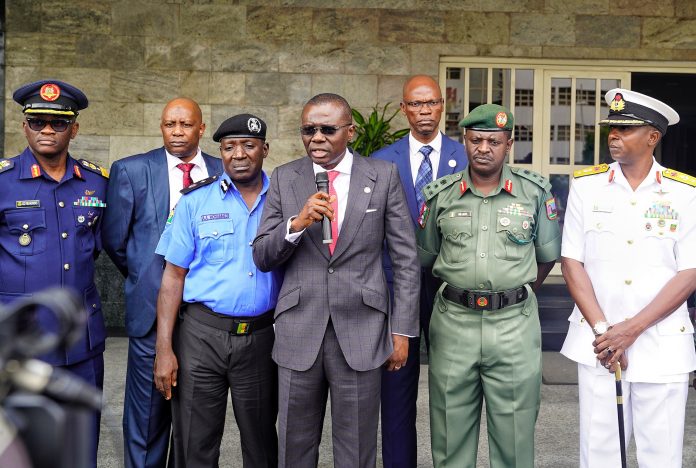 There will be an overhaul of the security architecture of Lagos State, Governor Babajide Sanwo-Olu, has revealed, after an emergency security meeting with chiefs of security agencies on Monday in his office.

The aim, the governor said, is to address the emerging security challenges facing the state, noting that re-organisation of the state’s security template was necessary in order to make the state safe for business and living.

The Governor, who briefed the press at the end of the meeting alongside commanders of security formations and top government functionaries in the State, said security agencies had been placed on alert in preparation for the development. He added that the reform would lead to a new engagement for security operatives and help in achieving efficiency in combating crimes.

He said: “We are just coming out of a security meeting and I wish to assure Lagosians that issues that bother on contemporary security challenges, including cultism, kidnapping, armed robbery, pipeline vandalism and indiscriminate driving against traffic were at the top of discussion.”

“We are going to revamp our security architecture. All our security formations have been briefed and they are well situated and well informed at keeping Lagos safe and secured.”

Sanwo-Olu said all the security agencies had briefed him about their respective strategies that would help in the revamping, adding that the security re-organisation would be unveiled soon.

The Governor pleaded for cooperation from residents when the security plan is rolled out, noting: “Making Lagos safe is our daily responsibility and all residents must also take up the challenge. I assure that we would begin to see a new deal in security which will further improve safety of lives and property”

“I assure every resident that we are on track. There were few things that we asked ourselves to go and do. There are a few details we are still going to pronounce later.”

The Governor said the security overhaul would also focus on activities of Okada riders and road regulations. He stressed that his government would embark on advocacy on the existing restriction laws for motorcycles.

He said: “That’s one of the things we have agreed to do. So, we will be embarking on a lot of advocacy on all media of communications to tell people about traffic and restriction laws. We don’t want to be making arrest without reminding ourselves of the right things to do and how to do it. It is when we have done that and some of us refuse to be compliant that the full wrath of the law would be applied.”