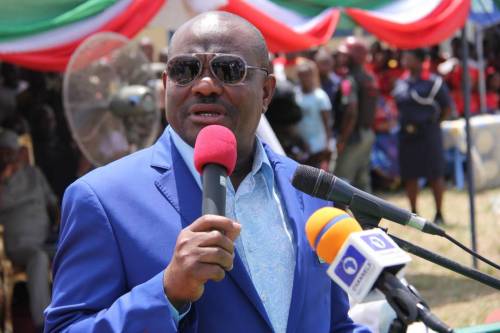 Rivers State Governor Nyesom Wike has warned that the State Government will not tolerate the shutting down of oil production facilities of operating companies in the state.

Governor Wike said under no circumstances should communities take laws into their hands by preventing oil production companies from working.

Speaking during a meeting with Chairmen of Cluster Developnent Boards in Asari-Toru, Akuku-Toru and Degema Local Government Areas with Oil Companies and Security Agencies at the Government House Port Harcourt on Thursday, Governor Wike directed the immediate revival of the State Steering Committee on Cluster Development Boards.

He said: “I will not support any company not to carry out their corporate social responsibilities to their host communities.”

“However, communities must not take laws into their hands. They must not stop production by the operating companies. Such actions will negatively affect the finances of the Federal Government, the state and the local government areas”.

He said in cases where companies fail to act within the expectations of the communities, the State Government will mediate through the Steering Committee on Cluster Development Boards.

“It is important that we do not allow crisis to occur in the communities. The Aeroton rig in one community was seized. That rig should be allowed to work. I called this meeting because of the concerns raised by the operating companies in the area”, he said.

Chevron Reiterates its Commitment to Socio-Economic Development of Nigeria