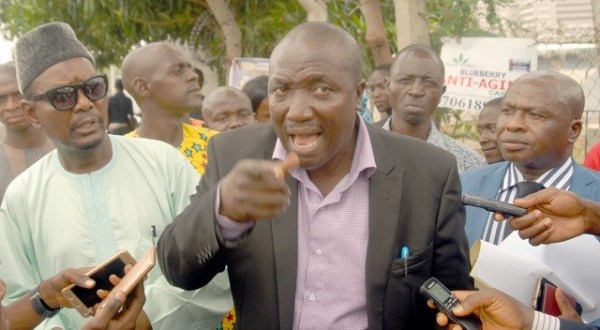 Shareholders have decried the sudden suspension of Oando’s annual general meeting (AGM), earlier scheduled to hold today by the Securities and Exchange Commission (SEC). SEC yesterday suspended the planned AGM, less than 24 hours to the meeting.

SEC stated that the suspension was based on the Ex-parte order of the Federal High Court, Ikoyi, Lagos, which ordered status quo to remain. But shareholders said the AGM was part of status quo since notice for the meeting had been served many weeks ago.

Shareholders alleged that SEC appeared to be working against the corporate interest of Oando and its shareholders citing the negative consequences of the latest action on the company’s business and share price.

Many shareholders that had come from as far as Maiduguri expressed disbelief that SEC would cancel the AGM less than 24 hours to the event, lamenting the money and time spent in getting to Lagos to attend the AGM.
Read Also: SEC on Oando: we followed due process

“There are no words to describe my shock and disappointment at how this is being played out. The SEC could not have made this decision to cancel the AGM overnight so it is unfair that they would tell us today, a day before the event. I spent money getting here, I have paid for accommodation and I will have to spend another night in Lagos. All expenses that I will never get back. Is SEC really working in my best interests,” Alhaji Kabiru Tambari, who came all the way from Sokoto, said.

“This is simply a game, because before we announced the AGM, SEC approved our accounts. So why now? Why is it now that Oando is climbing out of the hole of debt and returning to profitability? Like Skye Bank, they want to take Oando over and give to their friends. We will fight to the end as shareholders. If we have to go and meet SEC in Abuja, we will. The SEC is functioning like a car with no engine – and in this game, the only people who suffer are we the shareholders. We will not tolerate it!” Olusegun said.

Shareholders decried what they described as unethical to force Oando’s management team out including the constitution of an interim management overnight and without due engagement with Oando, installing armed policemen in Oando’s head office to instill fear amongst employees and more recently the suspension of the AGM less than 24 hours before the event.

They noted that these actions have led to disruption in business operations including Oando staff not going into the office for one week, a decline in share price, panic amongst employees and shareholders as to the future of the company and the resignation of two members of the board of directors for fear of taking on a regulator.

“What SEC is doing can only be described as regulatory rascality, and it is unfortunate that this is coming from a regulator. Are they regulators or revenue generators? We should go ahead with our AGM as though nothing happened, we should continue as planned with our AGM. SEC tried to do this in the case of Ikeja Hotels, but we did not let them stop us, we had our AGM under a tree,” a shareholder, Tunde Badmus, said decrying what he described as high-handedness of SEC.

SEC stated that it was suspending the AGM until further notice.

In a statement, the Commission stated that it directed the suspension of the Oando AGM to allow the parties maintain status quo.

“The Commission will update relevant stakeholders and the public on the outcome of the ongoing litigation,” SEC stated.

The Commission added that it would update stakeholders and the public on the outcome of the ongoing litigation.

SEC had on May 31, 2019 released a statement indicting the management and board of Oando of sundry corporate governance abuses and infractions of the relevant capital market laws.

The apex capital market regulator stated that it had concluded investigation into alleged corporate governance abuses at Oando and found that the company was guilty of serious infractions and market abuses.

SEC also directed the payment of monetary penalties by the company and affected individuals and directors, and refund of improperly disbursed remuneration by the affected board members to the company.

SEC also directed the convening of an Extra-Ordinary General Meeting on or before July 1, 2019, to appoint new directors.

These among others the SEC stated, are part of measures to address identified violations in the company.

According to the SEC, following the receipt of two petitions by the Commission in 2017, investigations were conducted into the activities of Oando.

Foundation calls for suggestions on demilitarisation of nuclear warheads