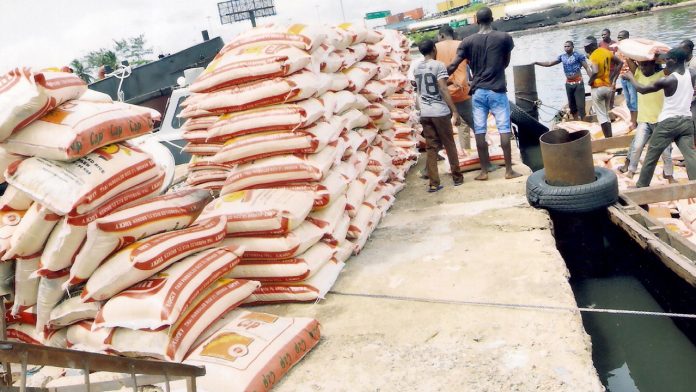 by Neil Munshi in Lagos

Inside Olatunji Bintin Laye’s small shop at the Ido rice market in Lagos, 50kg sacks are stacked up to eye level with brands such as African King and Royal Stallion, which proudly announce themselves as a “Product of Thailand”.

There is a name for the rice among Nigerian traders: Cotonou, the port city in the neighbouring country, Benin, from which the rice is smuggled.

“Cotonou is cheaper than Nigerian rice — it is not supposed to be like this,” said Mr Bintin Laye. “Nigerian rice should be cheaper.”

As he begins his second presidential term this month, Muhammadu Buhari is expected to sharpen his focus on diversifying Nigeria’s oil-dependent economy by boosting the agriculture sector. In his first term he had mixed success.

Mr Buhari’s efforts to spur domestic rice production through special loan schemes and a virtual ban on importing rice in some ways succeeded: production hit a record 4.78m tonnes last year, according to a US Department of Agriculture report, up roughly 60 per cent since 2013. But Nigerian rice farmers are unable to cope with demand. Many farmers still do not have any mechanical help and infrastructure — from roads to irrigation to mills — is shoddy while double-digit inflation is driving up prices.

Nigeria’s rice imports are expected to rise 13 per cent this year, to 3.4m tonnes, making the country of 200m people the world’s biggest rice importer after China.

The data, and the scene at Ido market and thousands like it across Africa’s most-populous country, contradict a claim by Mr Buhari in the lead-up to his re-election in March: “We don’t import rice, virtually, any more. We don’t import rice.”

In reality, Nigeria’s markets are full of foreign rice, which usually sells at a steep discount to its Nigerian counterpart. More than 1m tonnes of rice — 20m 50kg sacks — entered Nigeria through its porous border with Benin in the first three months of this year, according to the Rice Processors Association of Nigeria.

Benin, a tiny country of 11m people, has seen its rice imports from Thailand soar since June 2015, when the Central Bank of Nigeria first created a list of products — from cement to wheelbarrows and toothpicks to rice — for which importers do not have access to discounted foreign exchange.

Rice is among the most important staples of Nigerian life. It accounts for about 10 per cent of household food spending, according to PwC. The influx of foreign rice highlights the failure of one of Mr Buhari’s most important policies: to spur local production and manufacturing through the list, said Nonso Obikili, director of the Abuja-based Turgot Centre for Economics and Policy Research.

Recommended
Muhammadu Buhari’s challenge to keep Nigeria’s lights on
“I don’t think the CBN’s 42-item list has worked that well, not just for rice but for many other items on the list,” he said. “Benin is now one of the worlds largest importers of rice and we all know where it’s going.”

By essentially closing the ports to foreign rice and other goods that are ultimately smuggled in, Mr Obikili said, the government had “lost out on potential customs revenue from forcing the trade underground”.

The forex import ban is a reflection of the central bank’s broader unorthodox currency policy.

After the oil price crash in 2015, the bank sought to stabilise the naira by implementing multiple discounted exchange rates for various sectors and groups — from importers to those paying for medical care abroad. The move was partly blamed for exacerbating the recession that subsequently hit Nigeria’s oil-dependent economy.

Over the past few years, the central bank has closed all of the windows but one: some investors and exporters are allowed to buy dollars at the discounted rate of 305 naira, about 20 per cent lower than the parallel market rate of 360 naira to the dollar.

Andrew S Nevin, chief economist for PwC in Nigeria, said he understood the instinct behind both the forex import ban and the multiple rates. But the policies had far-reaching consequences, he said, and the duelling windows were one of the biggest impediments to foreign direct investment into Nigeria, which fell to $2.2bn last year from $3.1bn in 2015, when Mr Buhari took office. FDI is now a third less than nearby Ghana, which has an economy one-seventh the size.

Back at Ido market, Mr Bintin Laye, whose name means “the world is too small” in Yoruba, had a simple request: “They should open up the borders again. The price would come down.