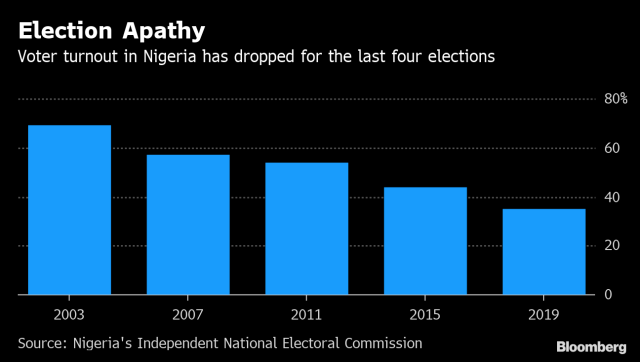 (Bloomberg) — As Nigerian President Muhammadu Buhari began his second term on Wednesday, he did so with the blessing of just 8% of the nation’s 201 million people.

While Buhari won 56% of the ballots cast on Feb. 23, only 15.2 million of the 29 million registered voters backed him. The 35% turnout, down from 44% in the last elections four years ago and a peak of 69% in 2003, is the latest indicator of mounting voter apathy in Africa’s biggest democracy.

The likely cause is a growing sentiment among Nigerians that their votes count for little in a political environment where power vests in those with the biggest campaign budgets or state backing, and that elections deliver few tangible benefits. Nigeria now has 87 million extremely poor people, more than any other nation, according to the Washington-based Brookings Institution.

“Many Nigerians, particularly the poor, are yet to feel the impact of democracy in terms of improved welfare and livelihood,” said Idayat Hassan, executive director of the Abuja-based Centre for Democracy and Development. “This has brought about increased disenchantment with the whole political process as going to vote has lost its meaning.”

Nigerian elections have also long been fraught affairs, with thugs and security officials all too often being used to influence outcomes, and allegations of rigging and bribery commonplace.

The latest vote was no different — Atiku Abubakar, Buhari’s main rival, has petitioned the courts to overturn the result. He says tallies he obtained from the electoral commission’s computer server showed he won. Buhari denies the allegation and says that Abubakar isn’t a Nigerian citizen, which renders him ineligible for the presidency. The legal battle is expected to go all the way to the Supreme Court.

Nosa Ogbeide, 42, is among those who’ve grown increasingly disenchanted about voting.

“On presidential election day, ballots cast in my polling station in an opposition stronghold of Lagos were set on fire by thugs who shot in the air and drove away voters,” he said. “I doubt I’ll take the trouble to vote next time.”

Analysts including Nnamdi Obasi of the Brussels-based International Crisis Group see the increased voter apathy as a worrying development and warns it will have serious implications.

“The falling voter turnout not only diminishes the legitimacy of elected leaders, it also raises serious questions about the vitality of the country’s overall democratic system,” he said.

The government isn’t concerned about the low voter turnout and doesn’t see it as undermining its authority, presidential spokesman Garba Shehu said.

“The government cannot force people to go and vote. It is a civic duty and citizens are required to perform freely,” he said by phone. “If they don’t come out and vote, you don’t blame the candidate.”

Nigeria has no plan to cutting fuel subsidy at this time...