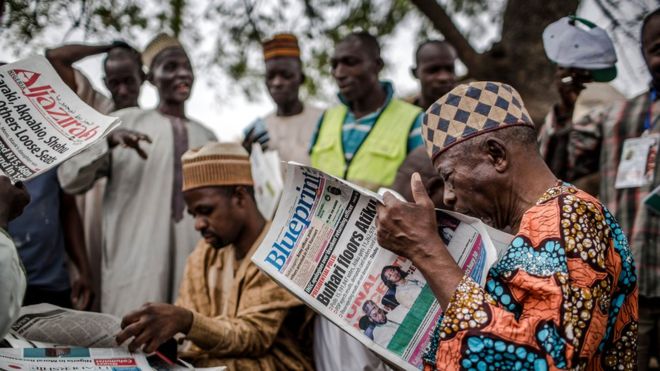 Lagos, Nigeria – Nigeria’s President Muhammadu Buhari took the reins of leadership for another term on Wednesday, against a tense backdrop of insecurity and economic uncertainty.
The 76-year-old fought a fierce battle against one of the country’s foremost politicians and former Vice-President Atiku Abubakar to clinch victory in the February vote — a win that is still being challenged by the opposition.
As Eagle Square, in the Nigerian capital of Abuja, was decorated ahead of Buhari’s inauguration ceremony, hundreds of people took to the streets in several cities on Tuesday in protest against a spate of kidnapping and security incidents in recent months.
They carried signs that read “Stop the Killings” and “Not Just Numbers,” asking the incoming administration to prioritize citizens’ security.

At a meeting with governors from northern states on Monday, Buhari said he was aware of the security challenges and promised not let the nation down.
“The security of the country is on my mind 24 hours of the day. I get daily and weekly situation reports. I have listened to your brief. I will look into your recommendations. I am acutely aware of the situation,” Buhari said in a statement.
Growing security challenge
Nigeria is facing a multifaceted security challenge. A conflict between herders and farmers, which began in the central states, has slowly spread to other regions and is thought to be deadlier than the Boko Haram insurgency. Kidnapping gangs have also unleashed a new kind of terror in northern and southern states.
In April, a British aid worker was shot dead at a holiday resort in Kaduna by gunmen who killed two people and kidnapped three others.
In the same month, the chairman of Nigeria’s education board and his daughter were seized by armed men while traveling on the Kaduna-Abuja highway.
Nigerian police launched a special anti-kidnapping squad to identify and expose the criminal gangs but the abductions have continued.
A Canadian and a Scottish oil worker were also kidnapped by armed men off a rig in the oil-rich Niger-Delta in April, and two Shell workers were also abducted and their police escorts killed a week before in the same region.
“In many places in Nigeria, people feel they can no longer walk around their neighborhoods unharmed. Public safety is the most fundamental responsibility of any state, and Nigeria has failed in this regard,” said Leonard Raphael, a Nigerian political commentator.
Tunde Leye, an analyst with Lagos-based research and intelligence agency SBM, told CNN while security agents need to secure highways across the country, the longer term fix will be to restructure the police.
“A special unit to tackle crime and militancy will work in the short term, but we need state policing — a structure that is closer to the people, which is part of what this administration is using to fish out Boko Haram militants in the northeast,” Leye told CNN.
Nigeria poverty ranking
Buhari came into office in 2015, while Nigeria was in the throes of a recession due to slumping oil prices and dwindling crude revenue. Terror group Boko Haram was also mounting a terrible war in Nigeria’s northeast.
He pledged to fight corruption and insecurity while also stabilizing the wavering economy he inherited from previous administrations.
Four years later, more than 87 million Nigerians now live in poverty, which is the highest number of impoverished people in any country in the world, overtaking India which was in the top spot in 2018, according to The Brookings Institution.

Nigeria has neither improved nor progressed in reducing perceived corruption in the public administration in 2018, according to Transparency International in its latest Corruptions Perception Index.
Many citizens also say Buhari’s administration has not delivered on promises to transform the country.
Nigerian actress Omotola Jalade-Ekeinde called out Buhari and his deputy Yemi Osinbajo in April, saying the country was “hellish” under their administration. She warned that the “continuous assault and killing” of citizens by law enforcement officials might make the country “implode.”
The actress told CNN she was only voicing the fears of other Nigerians, who have long protested police harassment and are worried about the economy.
“I keep receiving emails from many people begging for money to eat and pay rent. They are desperate and hungry, and that was not what we expected. We supported Buhari and Osinbajo because of their integrity and the promise to lift us the people out of poverty,” Jalade-Ekeinde told CNN.
Presidential spokesperson Garba Shehu declined to comment to CNN on the actress’s allegations.
‘Lone ranger in a madhouse’
To regain confidence in his administration, Nigerian economist and businessman Bismarck Rewane says Buhari and his team must address infrastructural gaps and institutional weakness that have beset the country’s public sector.
“The character of the president as an upright man who has zero-tolerance for corruption must trickle down all government institutions and sectors in Nigeria. Right now, he looks like a lone ranger in a madhouse,” Rewane told CNN.

Buhari did not also deliver a customary inauguration speech at the ceremony on Wednesday. But in a televised address to the nation on Monday, Buhari said his administration has recovered some of Nigeria’s stolen wealth stashed by corrupt politicians in banks abroad. He also admitted that the process had been slow.
“Under this system you can’t be too much in a hurry. You have to go through the police, and the police have to go through the rigmarole of full investigation before prosecution,” Buhari said. “That is my biggest frustration really.”