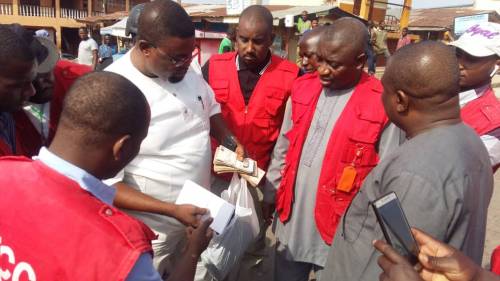 Local government’s funds have been traced to Bureaux de Change, it was learnt at the weekend.

This is why the Nigerian Financial Intelligence Unit (NFIU) issued new financial guidelines, according to sources.

It also said terrorists, kidnappers, bandits, illegal arm dealers had been exploiting the opportunity to convert the criminal proceeds into hard currency.

All local governments have been banned from creating additional accounts.

Violators of the cash transaction guidelines are to face trial by the Independent Corrupt Practices and Other Related Offences Commission and the Economic and Financial Crimes Commission (EFCC).

These details are contained in a document titled: “NFIU enforcement and guidelines to reduce crime vulnerabilities created by cash withdrawal from local government funds throughout Nigeria effective 1st June, 2019.”

The document, which was exclusively obtained by The Nation, explained the reasons behind the new guidelines.

The document reads in part: “In the process of financial transaction analyses, the Unit detected that cash transactions from State Joint Local Government Accounts (SJLGA) pose biggest money laundering threat to the country’s system through unleashing huge amounts of cash into the streets and also stuffing Bureau de Change with cash which terrorists, kidnappers, bandits, illegal arms dealers exploit as an opportunity to convert criminal proceeds into hard currency because the cash in the foreign exchange market is well sustained.

“The Unit received observation on illicit financial flows from the Economic Commission for Africa an agency of the African Union stating that over invoicing in form of foreign trade malpractices is the main vehicle used to launder monies from the African Continent and Nigeria contributes to the loss. Bureau de Change evidently adds heavily than any other Institution to this bad business.

“The Unit also worked with other appropriate international bodies to reverse the black list of the Nigerian financial system by the European Union on insufficient measures to stop terrorism financing and proliferation of weapons in parts of the country and statistics of the NFIU proved beyond reasonable doubt that cash withdrawals in states hit by terrorism and other violent crimes are far higher than states without such violent attacks.

“The Unit is conscious of the fact that the United States (U.S.) sanctions on Hezbollah also identified connection with car selling business in Cotonou, Benin Republic, Lome, Togo and several Lebanese restaurant chains , property companies in West Africa, including orphanages, fishing companies, commodity imports, drug traffickers and arms smuggling were used to fund sustenance of terrorism in Nigeria and violence in the Middle East.

“NFIU believes that the guidelines will re-enforce the existence of Local Government as an independent government established by the constitution at the grassroots with sovereign and elected officials directly from the people for their protection and welfare and derive revenues from similar sources as the Federal and state governments.”

The NFIU, however, reeled out fresh measures to protect local government funds.

The NFIU added: “It is hereby provided that the State Local Government Joint Account is only a collection account for funds to be shared directly into individual local government accounts in accordance with Section 162(7) of the constitution of the Federal Republic of Nigeria, 1999( as amended) and not for any other transaction or purposes.

“It is hereby ordered that with effect from 1st June, 2019, no withdrawal shall be done from the State Local Government Joint Account unless that withdrawal is going into a particular local government account.

“It is hereby ordered that local governments must be encouraged to have a Single Revenue Account, a Single Salary Account and a Single Running Cost Account for all payments and not to maintain additional accounts for the purpose of mitigating money laundering and helping investigations and accountability.

“ It is hereby also provided that with effect from 1st June, 2019, no withdrawal shall be made from any local government account anywhere in the country for a cumulative amount exceeding N500,000 per day. Any other transaction must be done through cheques or electronic funds transfer.

“It is hereby provided that any such withdrawal done in violation of all the provisions above by any financial institution or non-financial institution or their agent in whatever name or form will attract an instant penalty of 100 per cent refund of the amount withdrawn and to be effected by the Central Bank of Nigeria( CBN), EFCC, ICPC or NFIU as the case may be.

“It is hereby provided that any public officer anywhere in the country and/ or any private citizen found undermining or violating these guidelines will be investigated and prosecuted under the NFIU Act 2018, the MLPA 2012 ( as amended), the EFCC Act 2004 and the ICPC Act 2000 by the Independent Corrupt Practices and Other Related Offences Commission and the Economic and Financial Crimes Commission( EFCC).”

The agency explained that the new guidelines were not designed to be punitive.

It said: “There is nothing in this guideline to suggest or indicate any changes to the approval limits or thresholds of elected council chairman, elected councillors, council extracts or elected governors of states as originally guaranteed or secured under any law, or financial regulations or extant rules.

“Nothing in these guidelines exonerates any local government or state government from their legal responsibilities and liabilities under the law.

“These guidelines do not serve any purpose other than freeing the financial system from being stuffed with cash which criminals use to escape transparency, accountability and criminal investigation.”