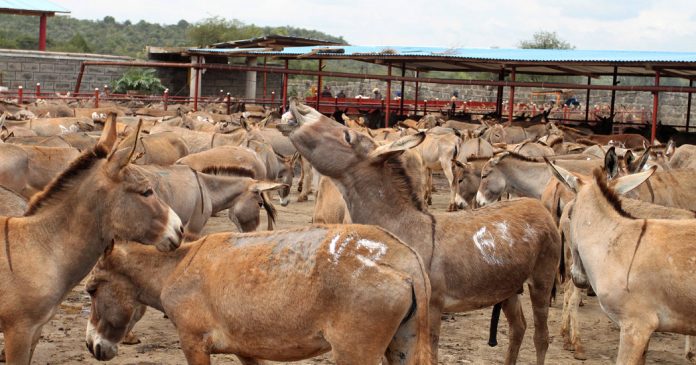 Demand for hides for use in traditional medicine drives push to increase domestic numbers
Donkey skins drying in the sun at a licensed specialised slaughterhouse in Baringo, Kenya © Getty

Traditional Chinese medicine has long been blamed for threatening populations of tigers, rhinos and elephants. Now the industry’s demand for the humble donkey is drawing international scrutiny.

More than 4m donkey hides are boiled to make the 5,000 tonnes of ejiao, a gooey substance billed as “blood-enriching”, sold in China each year.

Under fire from a growing number of African nations, the company at the centre of the global trade in donkey skins has said it will end its reliance on imports within three years by boosting domestic breeding.

China’s donkey population has dwindled as farmers, who used them as beasts of burden, migrate to cities and agriculture becomes more mechanised. This has meant that the country can supply less than half its needs domestically. Africa, where donkey numbers have grown in recent decades, has emerged as a vital source.

But after soaring prices for the hides led to a spate of thefts, politicians in Uganda, Tanzania, Botswana, Niger, Burkina Faso, Mali and Senegal labelled the trade a threat to local donkey populations and banned exports.

China’s biggest manufacturer of the donkey hide extract, Dong’e E’jiao, also known as Deej, imports 450,000 donkey skins each year, comprising more than half its supply, according to Liu Guangyuan, a company vice-president. Donkey skin prices have risen to Rmb3,000 ($473) apiece, he added.

“The price of donkey skin has been driven up by ejiao,” he said at the state-owned company’s headquarters in Shandong province, where a robotic production line churns out products aimed at pregnant women and the elderly. Ejiao is the ideal gift for Friday’s lunar new year celebrations, the company says on its website.

But despite Deej’s 27 per cent share of the ejiao market and $6.3bn valuation on the Shenzhen stock exchange, it is just one among dozens of ejiao producers whose demand far outstrips annual domestic supply of 1.8m donkey hides, according to analyst Chen Ying of BOCI, an asset management company.

Mr Liu said that other companies could struggle to meet demand with Chinese donkeys. “I don’t think [China] can solve the problem of declining donkey stocks within a decade,” he said.
A slab of donkey-hide gelatin in China, also called ‘ejiao’ © Underbar dk via Wikimedia Commons

Donkeys are expensive to breed because of their long gestation period, meaning Chinese farmers find it hard to make a profit from selling the skins despite their increased value. A total of 15 provinces and 22 cities have pledged to subsidise donkey breeding in the past two years, Mr Liu added.

Deej is also encouraging demand for donkey milk and meat, opening restaurants throughout China. The company has developed a mobile phone app providing farmers with the latest information on breeding techniques and market prices, which also allows it to harvest data about demand for skins.

“We will create a big data platform,” he said. “If you can’t solve the donkey meat problem, then you can’t realise [their] true value. People should understand that donkey meat is worth Rmb110 ($17) per kg.”

However, he attributed the problems to smugglers working for other companies. “All our company’s imports are legal,” he said. “In Africa we operate mainly in Egypt and Mauritania, because both these countries have completed the approval process for donkey hides to access China.’

The company’s imports are shifting away from Africa, Mr Wang said, with Mexico and Peru emerging as major sources.

WEEKAHEAD-AFRICA-FX: Most African currencies seen on back foot